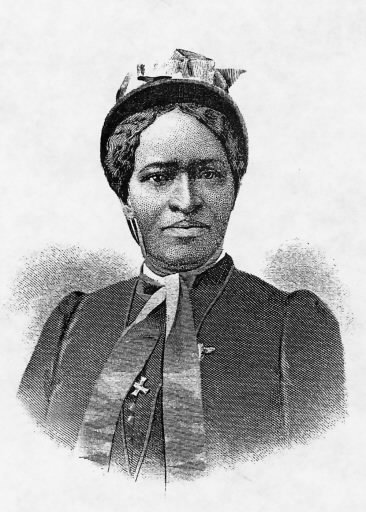 Nineteenth-century evangelist Amanda Berry Smith is profiled in a recent book “More Than Petticoats: Remarkable Pennsylvania Women.” (For details, see below.) Before the Civil War, her family purchased its freedom, and she resided in York County. Background post: Autobiographies contain valuable golden nuggets.

The historical monument for noted evangelist Amanda Berry Smith is out of the way for most York County travelers.
It’s on the by-passed Susquehanna Trail in Shrewsbury. It’s not far from the Mason-Dixon Line, the same boundary that spelled freedom for Smith as youngster… .

Even part of the marker is controverted. It states that she was converted to Christianity at a nearby church..
A brief biography on a Millersville University Web site said she became a Christian in Columbia, Lancaster County.
Despite her obscurity today, she was well-known in the 1800s. She spent nearly a half of a century on the mission field, covering four continents.
The Millersville biography said she was called “the singing pilgrim” and “God’s image carved in ebony” by the newspapers of her time.
A collection of stories on Pennsylvania women also casts a spotlight on Smith. A York Daily Record/Sunday New stories on Kate Hertzog’s book follows:

When the idea to write a book about renowned women of Pennsylvania was first pitched to her, author Kate Hertzog knew she was onto something special and meaningful.
“Pennsylvania women have had a real impact on the world,” said Hertzog, who lives in Mechanicsburg. “I hope this book inspires a greater interest in the important roles women have played throughout history.”
In her latest book, “More Than Petticoats: Remarkable Pennsylvania Women,” Hertzog has written 15 easy-to-read biographies about women who lived prior to 1907. The project took more than a year to complete and is now hitting bookstore shelves.
Before writing her first word, Hertzog decided that ethnic diversity would be a crucial goal of her work.
One of her biographies is written about former Shrewsbury Township resident Amanda Berry Smith, who was born into slavery in 1837.
While doing her research, Hertzog said she marveled at the struggles blacks faced, not just as slaves, but also after they were set free.
“I didn’t realize that even as free citizens they had so many restrictions placed upon them,” Hertzog said.
For example, Smith’s father, Sam Berry, had earned enough money to buy his freedom from the Baltimore, Md., family that owned him. When his daughter was 7 years old, Berry traveled to Shrewsbury to visit kin.
At that time, even a freed slave could not leave the state for more than 10 days without fear of being re-enslaved. So when Berry did not come home within that time, it caused great grief and fear in his family.
Though he was liked by whites in Maryland, even Berry’s strongest supporters were afraid that his failure to return in the law’s allotted time would be looked at by other blacks as a precedent for pushing the law’s boundaries.
When Berry did return to Baltimore, he grabbed his family and returned to Shrewsbury the same day. Shrewsbury had several well-known stops on the Underground Railroad, which was used by slaves trying to escape north of the Mason-Dixon Line to freedom.
Over her next 20 years in Pennsylvania, Smith would face terrible acts of violence and intimidation by supporters of slavery as her family helped many slaves escape their bondage.
Hertzog writes that many of these trials and tribulations taught Smith the value of courage and fortitude. In time, Smith became a famous evangelical, who spread a message of holy sanctification around the world.
“It is a powerful story,” Hertzog said.
This is Hertzog’s second book. Her first was a travel and relocation guide called “Insiders’ Guide to Gettysburg.” With this book completed, she has returned to her career as a freelance proofreader and editor.
But with each book that hits the shelves, Hertzog is gaining confidence. In time, she would like to write a novel. And while she has some ideas, she is keeping mum on the future.
Regardless of what she decides to do, Becky DiRosa, Hertzog’s friend and assistant on the “Remarkable” book said she is certain it will be a success.
“She has this way of putting history readers at the scene,” said DiRosa, a history teacher in Norfolk, Va. “You read it as if it could be happening today.”
While this is Hertzog’s first national publication, DiRosa said she hopes it won’t be her last.
“To most people, “(Hertzog’s) writing ability has been like a kept secret,” she said. “But those of us who know her believe the world is in for greater things.”
For now, Hertzog is content for the little piece of history she has made.
“It’s a lot of work to create a book,” said Hertzog. “I’m going to take some time to reflect on this past year before deciding what to do next.”
The women ‘More Than Petticoats’
Sybilla Masters, 1676-1720
Lydia Darragh, 1728-1789
Margaret Corbin, 1751-1800
Lucretia Mott, 1793-1880
Rebecca Webb Lukens, 1794-1854
Mary Ambler, 1805-1868
Ann Preston, 1813-1872
Elizabeth Thorn, 1832-1907
Amanda Berry Smith, 1837-1915
Ida Tarbell, 1857-1944
Nellie Bly, 1864-1922
Mary Engle Pennington, 1872-1952
Florence Seibert, 1897-1991
Marian Anderson, 1897-1993
Rachel Carson, 1907-1964
(Amanda Berry Smith photograph courtesy of Millersville University.)

“More Than Petticoats: Remarkable Pennsylvania Women” by Kate Hertzog is available in area bookstores and online book retailers for $12.95.