Agnes in York County, by the tragic numbers 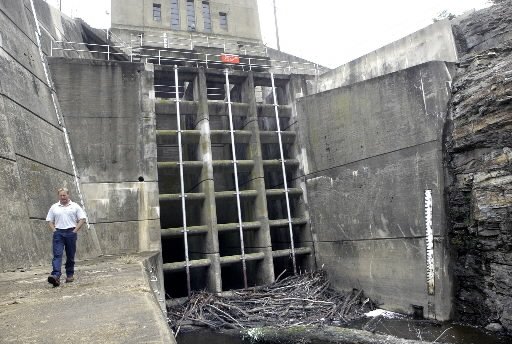 Steve Young, a dam operator with the U.S. Army Corps of Engineers, walks along Indian Rock Dam. The dam regulates the flow of the main branch of Codorus Creek into the City of York. The dam, which sits 83 feet above the stream, could not completely contain the creek’s waters when Tropical Storm Agnes hit in 1972. The dam was constructed in the early 1940s in response to flooding in 1933 and 1936. Also of interest: York County weather forecasts before, during and after Tropical Storm Agnes’ wrath.

Hurricane Agnes, a tropical storm when it hit York County, reigned and rained 35 years ago.
The storm accumulated some big numbers, as found in a York Daily Record story:

16.02: Inches of rain that fell
13.5: Inches that fell within a 24-hour period
4: Number of people who died in York County. A York man was swept off the Richland Avenue bridge and into the Codorus Creek. A York Township couple died when floodwaters moved their home off its foundation. The body of a Harrisburg man was found in Goldsboro.
1: Number of people missing. An unidentified elderly man was reportedly swept into the Poorhouse Run flood control project on Prospect Street.
$10 million: Amount of damage caused in the City of York