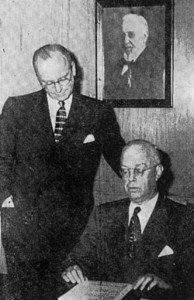 William J. Fisher, seated, A.B. Farquhar Co. president, and his son, Edward H. Fisher, sold the York, Pa., company to Oliver Corporation in 1951. The farm equipment manufacturer started in 1856 and was one of the prime movers behind the York Plan. Background posts: Who will lead the York area in the future?, Carnegie to Farquhar: ‘… I am ready to go out and enjoy myself’ and Pro/Con: Should York’s leaders have surrendered to the rebels?

In plain view: Founder A.B. Farquhar (in portrait) appears to be overseeing the sale of his 95-year-old company only six years after the company’s success in the York Plan. Farquhar executives cited the difficulty of independent, medium-sized companies trying to do business through depressions, wars and war threats. Oliver eventually moved jobs to other locations, and city officials ordered the demolition of Farquhar’s complex fronting North George Street in the vicinity of present-day CGA Law Firm.
Behind the scene: Caterpillar and other large companies with out-of-town headquarters moved into York County in the post-war years, competing for workers with longtime York-based manufacturers. Meanwhile, Farquhar and other companies that had grown up through the pluck of now-deceased entrepreneurs started selling to large, out-of-town interests in those years. York Corporation, selling to Borg-Warner in the mid-1950s, is another example. This trend continues today, with a wrinkle. Some of that work is not only moved out of town but also out of the country.
Further details: The “Autobiography of A.B. Farquhar,” sometimes called “The First Million the Hardest,” covers the life of this captain of industry and his venerable York County farm equipment manufacturer. Available on the Web via www.google.com/books.
Posts in this series:
– 400 years ago, John Smith explored Chesapeake Bay – 1/31 iconic images
– Declaration signer James Smith tops York County patriot list – 2/31 iconic images
– Going to market a longtime York County pastime – 3/31 iconic images
– William C. Goodridge: From slavery to success story – 4/31 iconic images