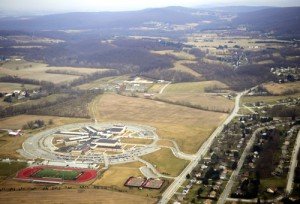 When you’re on the ground, the size and scale of Central York High School is hard to take in. When you’re about 2,000 feet above sea level, the complex in the Pleasureville/Emigsville area is immense. York, Pa., Daily Record/Sunday News photographer Chris Dunn captured this Springettsbury Township scene in a February flight over York County. Planning for the high school began in July 2000. Controversy followed over the cost of the land. The first spade was turned over in the ceremonial groundbreaking for the new school in 2003. See more of Chris Dunn’s work – and top images by other YDR/YSN photographers – at Look, one of Yorkblog.com‘s blogs. (Click to enlarge. Check out additional aerial photos below.) Also of interest: Central York High School produces student history sleuths.

To check out the civil court records, go to www.york-county.org. Choose the prothonotary’s office and look for “Civil Case Search.”

And don’t forget about the county’s online archives: The York Daily Record/Sunday News reports: “People can search archived records, such as naturalization records, old marriage and death records, and old coroner’s records, at www.yorkcountyarchives.org and request copies. The documents can be purchased remotely and then emailed, mailed or faxed to the requestor.”

This York Sunday News story wraps up these and other such online resources: York County civil records Internet search part of a broader effort to make records available online

Here comes the guv: Gov. Tom Corbett visited York recently to view the African American History Fair at Crispus Attucks.
Dealing with congestion: The York County Planning Commission has cited at least three York County road corridors as clogged: Rathton Road, Church Street and North Hills Road. Here are several posts linked up with those regions: · Where does Rathton of York/Spring Garden Township Rathton Road fame come from? and · A West Manchester village center – Shiloh on Church Road – that up and moved and · Check out this aerial view of Possumtown – Pleasureville – in the hills north of York.
Forum of the day: Well, it’s not really a forum, it’s an auction, eBay. Only in York County’s Joan Concilio lists  some of the items from the county that have been on that noted  online auction.