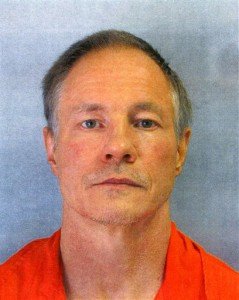 Hubert Michael, 56, seen in this recent prison mug, escaped execution this week for his murder of a 16-year-old in 1993. His legal actions to escape the death penalty have brought his terrible act in northwestern York County back to the headlines. Also of interest: Check out this list of York County’s most notorious criminal cases in past 50 years

Yorktownsquare’s list of most notorious crimes began some years ago with the brother-against-brother murder of New Freedom’s Gregory Witman, which tops the list.

Unfortunately, I’ve been adding to it since as cases are resolved, including the addition just this week of another terrible guy who committed a horrific crime. Lemoyne’s Hubert Michael killed 16-year-old Trista Eng in Franklin Township, up in York County’s remote northwest section.

The legal actions – successful so far – to keep the imprisoned Michael alive have brought out details of his terrible act.

Here are the facts of case in which Michael pleaded guilty to murdering Eng after kidnapping her in 1993, according to the Associated Press (11/9/12):

“At a 1997 hearing, his former public defender testified that Michael told him how he picked up the girl hitchhiking, bound her with electrical cord stolen from her home, raped her and killed her in state game lands.

“He was not charged with rape, although prosecutors suspected it, because of a lack of physical evidence. Michael confessed to his brother, who located her remains about a month after she disappeared, and called police. She had been shot in the head and chest.

“At Wednesday’s pardons board hearing, the victim’s mother, Suzanne Eng, set the tone for relatives and friends who made emotional pleas to keep the execution on track.

“‘He kidnapped her, he raped her and then he executed her,'” the mother said. “‘As she begged him not to kill her, he shot her three times.'”

Yes, Michael’s case is now on the list of most notorious criminal cases in the past 50 years.

Curtis Sipple was the first and last person from York County to be executed at Rockview state prison.

As I wrote in “Never to be Forgotten,” Sipple was executed in an electric chair in 1919.

Sipple, 19, killed two bunkmates with a metal bar as part of a robbery plan. The murder happened in Cly, a railroad stop, in the northeastern part of York County. 