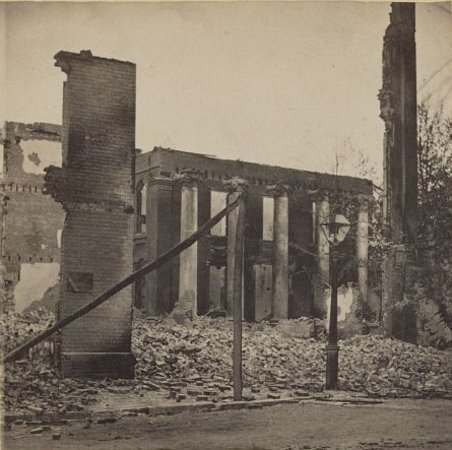 The Confederate raid on Chambersburg on July 30, 1864, resulted in the fiery destruction of more than 500 buildings. It was a retaliation, the Confederates argued, for similar Union action on Virginia soil. To celebrate its Civil War heritage, Chambersburg sponsors an annual series of Civil War lectures, including an annual Lincoln Symposium May 16-17. Background posts: Mayor of York, Pa.: ‘We are no longer unprotected’ , Was York’s surrender justified? and Rebel invaders put off by earthy Pennsylvania women.

Jubal Early.
“I am alone responsible, ” General Jubal Early said of the Chambersburg fire, “as the officers engaged were executing my orders.”
After observing Early in action in 1864, some in York felt vindication for surrendering their town the previous summer.
Chambersburg has not forgotten the many ways the Civil War came to that town. Indeed, it celebrates its distinction of being the only town north of the Mason-Dixon Line to be destroyed during the Civil War.
The local chamber of commerce sponsors a series of annual seminars to build Civil War literacy. (York will hold a panel on the Confederate occupation on June 25.)
Consider this schedule:
-Annual Lincoln Symposium, May 16-17.
-The Gettysburg Experience, July 23-27.
-The Men Stood Like Iron, the Iron Brigade from Second Mannassas to Gettysburg, Oct. 3-5.
More information about the seminars is available on the Web site, http://www.chambersburgcivilwarseminars.org, or by calling Cindy Baker at the Chambersburg Chamber of Commerce, 717-264-7101.
For scores of posts on York County in the Civil War, see this blog’s Civil War category. Also, see Scott Mingus’ blog Cannonball.