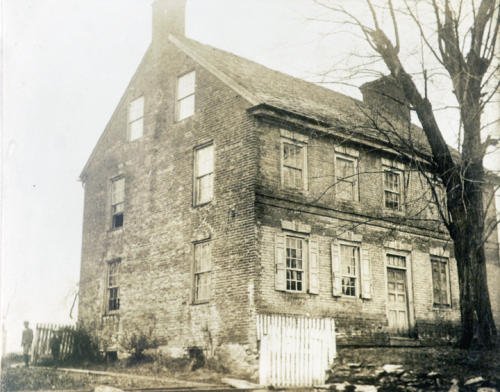 Abraham Lincoln’s funeral train stopped in York, Pa., on April 21, 1865. The train’s sad visit to York’s North Duke Street station came only a couple of miles from where his assassin, John Wilkes Booth, attended school a dozen years before. This building at 420 Prospect St., is believed to have been Bland’s school or the Sherwood Academy. Lincoln’s train also rolled through York County on its way to Gettysburg for his famous speech in 1863. Often overlooked was the visit by the president-elect’s train, without the president-elect, in 1861. Also of interest: Abraham Lincoln, Part I: How many times did the 16th President’s train touch York County?

We know about Abraham Lincoln’s passage through York County in November 1863 to deliver what became known as the Gettysburg Address.

We’re learning about his funeral train’s visit to New Freedom and York on its long way to his interment in Springfield, Ill.

The following from my ‘East of Gettysburg’ tells about an almost-visit by President-election Abraham Lincoln to York in 1861: 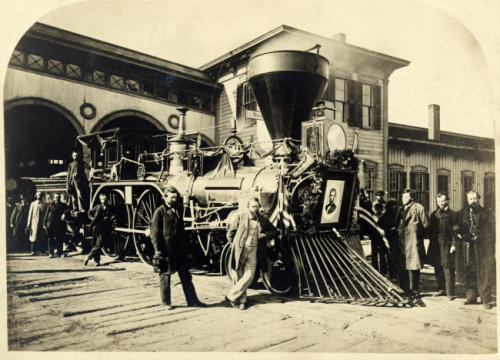 Steam into History’s locomotive is a replica of the train Abraham Lincoln rode in to Gettysburg to deliver his address and that of the train that carried his body in 1865 (seen here in this Library of Congress photo), according to the excursion service’s website. Southern York County’s Steam into History offers commemorative Lincoln funeral train rides on April 25-26.

From East of Gettysburg:

In late February 1861, York County residents by the scores prepared to salute the man who was about to become the 16th president of the United States, Abraham Lincoln.

The Republican president-elect’s extended rail tour started from his Springfield, Ill., home with the destination: The White House, Washington, D.C.

York, a southcentral Pennsylvania town of 8,600 people, secured a scheduled morning visit as the train turned south from Harrisburg.

But on the night before his appearance, as he shook hands in the state capital, Lincoln grappled with a decision.

If he kept his York appointment, he could roll into danger 50 miles farther down the Northern Central Railway tracks. Pinkerton detectives had learned of an assassination plot in Baltimore, a large Southern city whose voters had overwhelmingly sided with Democrat John C. Breckenridge for president.

But if Lincoln arrived in Washington through stealth, some might believe that he lacked courage.

A two-car train, with Lincoln secretly aboard, headed east toward Philadelphia. Upon his arrival, Lincoln boarded a Philadelphia, Wilmington and Baltimore Railroad car. He pulled into Baltimore in the early morning hours, shuttled to the Baltimore & Ohio line and arrived in the nation’s capital at 6 a.m., Saturday, Feb. 23, 1861.

Four hours later in York, Republican leaders, among a crowd of 5,000, waited at the Northern Central station. A band played patriotic music. A four-wheeled carriage — the best the borough could offer — awaited the distinguished guest.

The county scrubbed up well for the chief executive-elect’s visit, considering the strong anti-Lincoln sentiment within its borders.

York County voters had supported Lincoln’s opponents by a tally of 6,633-5,128 just months earlier. That outcome reinforced the county’s reputation as land of the Democrats. The county had backed Democratic-Republicans or Democrats for the presidency in every election in the past 50 years, maybe longer.

The Democratic York Gazette, reflecting the majority view, asserted that county residents should use the ballot to protest potential conflict between the North and South.

A vote for Republican Abraham Lincoln meant a vote for division.

“They (Democrats) are for the Constitution and the Union,” the newspaper said, “and will fight sectionalism to the death.”

That was the position of the Peace Democrats, derisively called “Copperheads” because of their harmless appearance but potent bite. They called for peace and national unity but shot venom at Lincoln and his desperate efforts to maintain the Union.

“York was distinctively Northern but not bitterly anti-Southern,” A.B. Farquhar, a York businessman, wrote years after the war.

Many in York County believed slavery was wrong in principle, he explained. At the same time, they believed that slavery reckoned better in practice than in theory.

“No matter what his personal disposition might be,” he wrote, “slaves were so very expensive that it would be as ridiculous to maltreat them as to maltreat a stable of blooded horses.”

Despite such sentiments, the throng strained to see Lincoln as the train pulled into York’s Northern Central Railway station from Harrisburg.

Out of the presidential car popped a tall man with whiskers.

No, he was too good-looking.

“Gentlemen,” he said, “I am sorry to announce to you that Mr. Lincoln is not in the train. He was called to Washington last night on important business. He was sorry to disappoint you but left this morning in the early train.”

Robert Todd Lincoln, the president’s son, briefly greeted the crowd as the train headed south, but his gesture did little to soothe the disappointment.

The grumpy crowd scattered, and the empty carriage rattled away from the depot.

“Who will attempt to give the various comments passed upon Mr. Lincoln and his movements?” The Gazette wondered. “Let our readers put their imaginations to work. They cannot fail. Thus ended the grand demonstration in honor of Mr. Lincoln to York.”

The American Union was regressing into disunion.

On April 12, Confederate forces fired on Fort Sumter in Charleston, S.C. — a deliberate act of war. 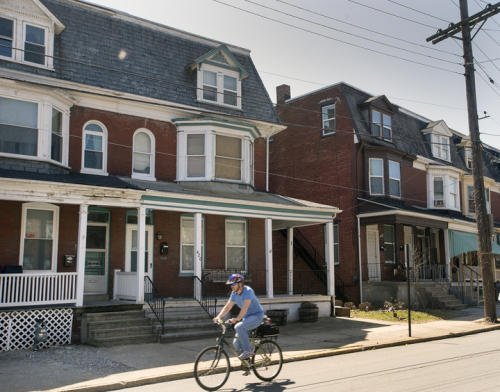