About shopping for food and Edsels in Springettsbury Township: Linked in with neat York County history stuff, April 18, 2012 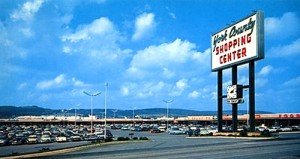 Many York countians will remember this is York County Shopping Center sign. Stephen Smith of York, Pa., provided this image, circa 1962. He noted that you can see part of Food Fair, one of the retailers at the center, the York-areas first suburban shopping plaza.  (Click on image to enlarge.) See a second nostalgic photo about a nearby Edsel auto dealership from Steve below. And for an area view of the center from about 1970, see: How a bird saw the York Mall/York County Shopping Center in 1970 and Just try to resist this memory-tugging Sear photograph from the air.

I listed Brad’s “A History of Mount Wolf” as one of 11 best bets for understanding York County in the 20th century.

I wrote: “This booklet is perhaps the best of the many histories of local communities available. It follows the transition of Mount Wolf from a self-contained town with its own industries to that of a bedroom community, a course taken by many municipalities.”

And that 1977 history was updated for Mount Wolf’s centennial anniversary in 2010.

Brad had an encyclopedic mind about all things Mount Wolf.

“A conversation between Mr. Rentzel and I usually lasted for hours. Even a chance encounter along Wago Road turned into an hour plus discussion on local history.”

That was my experience, too, in the half dozen times we met. I always learned something.

– The polio scare – and reality – The York Daily Record/Sunday News is looking for memories about the polio epidemic of 1941, which ended just as Japanese bombs dropped on Pearl Harbor.

– Blog post of the day, I: Yorkblogger Scott Mingus’ newest book is coming out soon. Meanwhile, book cover and title is out: “William ‘Extra Billy Smith’ From Virginia’s Statehouse to Gettysburg Scapegoat.” Interested to read about what Scott comes up with about Extra Billy’s time in York County.

Blog post of the day, II: Buffy’s World takes a tour of best of the week’s blogs: PSU football to Google Plus to Frankie Muniz and Kingsfoil. 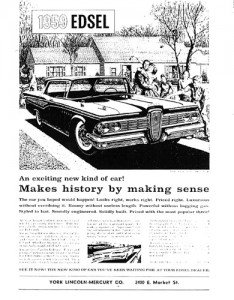 Yes, a York County dealership sold Edsels. Stephen Smith emailed this photograph of an advertisement touting the infamous American automobile. Did you ever own an Edsel or know someone who did? (Click on image to enlarge.) For more about the Edsel story, check out Edsel Owner’s Club’s history page.