Abe Lincoln post leads the pack in yorktownsquare.com’s Top 10 most viewed of 2012 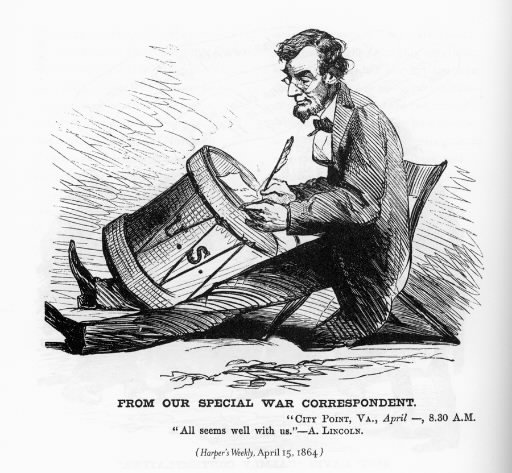 This cartoon, found in Jim Lewin’s and P.J. Huff’s book, “Lines of Contention: Political Cartoons of the Civil War,” was featured in the No. 1 post on Yorktownsquare.com in 2012. That post tells about how a York County newspaper treated Lincoln and his proclamations with disrespect or indifference. Also of interest:Check out the top 10 York Town Square posts in 2011 .

It’s a good thing that crime-related posts didn’t dominate this blog’s Top 10 list in 2013. Such posts usually do well on the web, so it’s gratifying that viewers of this blog want more than that.

OK, the KKK post as well as the prostitution post (Telling about teen prostitution in World War II. Yes, really) are there. But the list is replete with, well, just interesting stuff. A real blood-and-guts post, 11 – Check out this list of York County s most notorious criminal cases in past 50 years  – fell just short of making the top 10.

The leader was the post about how every one liked to take pot shots at Abraham Lincoln’s presidency, including a bunch of folks in York, Pa.

2. Finder of KKK certificate: My first thought was fear … .

3. Continental Congress struggled into York, and delegates strutted back to Philly 9 months later.
4. Der Belsnickel of the Pennsylvania Dutch: He looked scary and carried a sack of presents

7 Gettysburg s Majestic Theater: This was a golden project

8. Can anyone ID the young woman in the picture?

9. How a bird saw the York Mall/York County Shopping Center in 1971.

In total, all you readers took in 340,000 pages in 2012,  making  more than 2 million pages viewed since the first post went up in July 2005, including about 1.3 million in the past three years. In 2012, I also failed to post for a couple of days – for the first time since really near the beginning – because of the press of duties when I was  in Newtown, Conn.

Oh yes, No. 12 on the list was my favorite type of post: How one spot in York County, Pa., tells much about what is going on around there. It’s a post in which I try to make sense of things. Hope I succeeded.