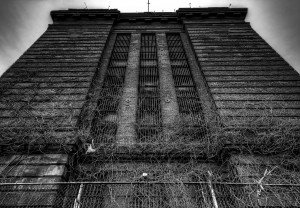 Since the present York County Prison opened on Concord Road in 1979, its predecessor on York City’s Chestnut Street has been deteriorating. It is a massive building awaiting its sentencing. Could it be remodeled into a restaurant? Could it be cleaned up enough for tours as fundraisers for non-profit groups? It’s on the market and seems as if it could be used for something. Blake Stough’s Preserving York blog records a Stough-led group’s tour of the old prison. It produced many compelling photographs including the one above from photographer Rob Dietrich’s Flickr site. His site also contains many other memorable prison photographs.Check out Preserving York’s: Old York County Prison – Dare To Take A Look Inside? Dare you? Also photographer Scott Frederick was there artfully documenting the scene. (See links to other yorktownsquare.com blog posts about the prison below.) Also of interest: York County, Pa.’s, old Chestnut Street jail: ‘York has a treasure in it’.

People around York County feel passionate about their markets.

This YDR Facebook question drew many responses:  How often do you go to market – Central, Farmers, Hanover, Columbia, Eastern, Morningstar? Which market do you enjoy the most?

Here are a few:

– Daphne Shaffer-Fuller – I go to the Central Market on Tuesdays. I like it best, I like Farmers too, but don’t go there as much.
– James Krebs – I like Central, Morningstar and Eastern, but must admit it’s harder to go to Central because of parking for my work van.

– Brad Koller – Central and Eastern mkts are my Favs .. but I do go to Roots a few times a year..
– Hanna Barbera – I try to go to Central Market every Tuesday and Thursday since I work downtown and then I go on Saturday mornings – especially if I have clients on Saturday morning then I go by market after my appointments. I love how they have improved Central Market – it has become a great community center, with food, small shops, music, and it connects with the “art district” – Beaver Street – and Saturdays in york city feel a little bit like you are someplace on vacation. York City just keeps getting better.

– Amanda Glenney – My family and I go to Morning Star every other weekend in the summer and about once a month in the winter. I try to go to Central market as much as I can. We enjoy going to Roots and Green Dragon in Lancaster County also.
– Angelyn Reichard Holtzapple: We go to Eastern Market every Friday.

Growing in Loganville:  Check out the ydr.com series “Exit Interviews,” as it visits the barn full of antiques and a lot of other stuff in Loganville.

Forum of the day: Sometimes a town can be associated with bad news, such as the animal cruelty case near East Berlin.That shouldn’t detract from the goodness of a neat and tidy East Berlin. Have you been to the shops and restaurants in East Berlin recently? Thoughts about this town? Please comment below.  Background: Adams County’s tiny East Berlin preserved in mighty way

The York Airport hosted visiting World War II planes late last week. Did you visit this high-flying exhibit at the Thomasville airstrip? Anything you’d like to say to our veterans who served our country? Please comment below.