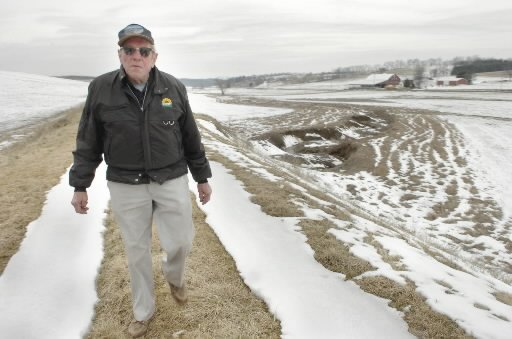 This photo shows Bob Rebert, embroiled in a fight against a proposed sewage pipe that would cross his farm, walking on an old railroad embankment in 2007. That railroad embankment has particular significance. Background posts: Abe, Gwyneth passed through Porters Sideling and Pamadeva. Get it? Pennsylvania. Maryland. Delaware. Virginia..

Outside forces are looking to lay sewer and gas lines under Bob Rebert’s North Codorus Farm.
He’s fighting the sewer line in court believing an ag security program he’s under prevents such sewer line construction.
The sewer line, at least, would go under a railroad embankment crossing his farm.
That’s not just another railroad embankment that lived a long existence bearing trains carrying farm products to market… . 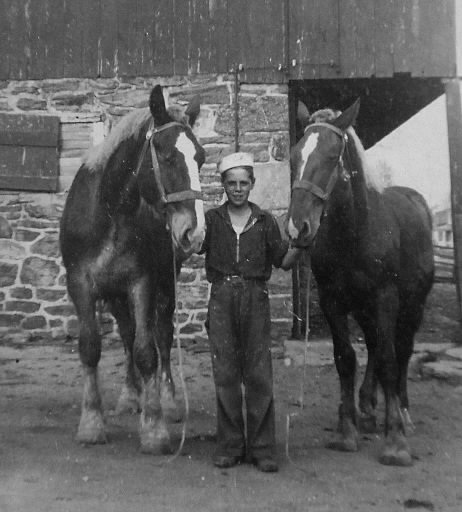 Bob Rebert and two work horses – Doc and Pet – stand outside a barn in this undated photo. Additional background posts: Abe’s smallpox story has been told before and York County has its own Lincoln photo debate
That was the Hanover Branch Railroad that carried Abraham Lincoln to and from Gettysburg to deliver his famous speech in November 1863.
The Hanover Branch was completed in 1852 between Hanover Junction (giving that station its name) and Hanover. Eleven years later, Lincoln got off a Northern Central Railroad train at the junction, boarded a Hanover Branch train and headed to Gettysburg.
Earlier that year in July, the Hanover Branch was a vital means of transportation to move wounded from the battlefield to Northern Central Railroad trains, which carried them to military hospitals in York and elsewhere.
For decades, The Hanover Branch operated until service terminated and its rails were pulled out. Today, an embankment is visible at several places in its former 12-mile path, crossing Bob Rebert’s farm and many others.
One wonders whether the building of the original line in the 1850s was as controversial. But land was more plentiful then.
The following story, published in the York Daily Record/Sunday News on March 11, 2007, tells about the ongong battle in York County today pitting agrarianism vs. development:

Together, Bob and Lucreta Rebert labored long hours every day for nearly 60 years to continue their farm’s centuries-old legacy. The ground has been used to raise soybeans, corn, wheat, barley, hay and other crops.
To protect the future of the farm, the Reberts many years ago entered the land in an agricultural security area, which was supposed to protect it from development.
The Reberts’ tradition is carried on today by their 50-year-old son, Bobby Rebert. But life doesn’t always abide by plans.
Lucreta died a little more than a year ago, and her loss is still sorely raw for Bob Rebert, 76, and his family.
“I miss her dearly every day,” Bob Rebert said.
And now another loss is on the horizon.
Although the Reberts took every measure they knew to guard their land, a local government agency last week served condemnation paperwork to Bob Rebert’s attorney, stating that part of his farm will be taken for development of a public sewer line.
The agencies say they’re using the least expensive path for the line, and say they don’t want to hurt Rebert’s land.
……….
It’s Tuesday afternoon.
Bob Rebert stands in the house where he was born, beside a bed that’s covered with a quilt his wife made of blue-and-white calico. The bed is in the living room because, toward the end of her illness, Lucreta could no longer climb the stairs to the second story of the farm house, he says.
Several family photos hang on walls adorned with a subtle floral-printed wallpaper. A carefully placed piece of a drapery — made into a wall hanging years ago and passed down for generations — hangs nearby on a wall in the dining room.
“My father built this barn out here in 1928. They cut wood from the woods on the hill and built it,” Rebert says as he points outside.
The house is neatly kept and quiet.
He stares through a window near the corner of the room at a farm field that runs parallel to a pathway cut into the land.
“That’s the railroad embankment,” Rebert says. It’s part of the line that carried Abraham Lincoln to Gettysburg for his famous address in November 1863. “There are still some visible signs of the track nearby.”
He takes a seat at the dining room table that’s covered with old property deeds — some dating back to the mid-1800s — and more family photos taken over the years of Rebert family members working on the farm. A 1988 newspaper clipping with the headline “Reberts plan to keep up farming tradition” is mixed in.
One photo shows Bob Rebert about age 12 standing between two massive Percherons. “Doc and Pet,” he says quickly, recalling the names of the work horses as if he’d seen them yesterday.
Bobby Rebert enters the dining room and takes a seat near his dad. They discuss the Jefferson Codorus Joint Sewer Authority’s demand for a three-quarter-mile piece of the farm.
“We don’t want the sewer line,” Bob Rebert says, “because there’s an alternate route.”
North Codorus Township, where the bulk of Rebert’s farm is located, formed an agricultural security area organization sometime around 1987. “I was one of the first farmers to sign. . . . It’s supposed to protect you,” he says.
Construction for the line will destroy fertile farmland, Bob Rebert says. “When they disturb the area, it’s going to take my son five to seven years to get it back into production,” he says.
The sewer authority offered about $7,500 for the three-quarter-mile tract of Rebert’s land needed for the sewer line, he says.
He didn’t accept the offer, and now the authority plans to condemn that land.
Along with the condemnation come questions and fears of what could go wrong with the sewer line and how it could impact the farm, Bobby Rebert says. What happens if the line leaks into the crops? Who will cover the loss? What kind of maintenance will be required?
“They can drive in there day and night,” Bobby Rebert says. “Once they have that right-of-way they can do anything . . . is that another battle we’d have to fight?
“We thought with the zoning laws, ag security . . . that’s why you enter the land . . . You think the laws are on your side,” he says. “It’s awful discouraging.”
The sewer authority makes it sound as if the line will be installed, go unnoticed and be forgotten, Bobby Rebert says.
“I’m sure the people that will have to pay to hook up — they won’t want it to be forgotten about,” he says.
It’s difficult to watch his father endure the condemnation threat, he says.
“I know how hard my mom and dad worked, and I know how hard I’ve worked,” he says. “You go to bed thinking about it, and you wake up thinking about it.”
Bob Rebert, who also struggles with heart problems, faces thousands of dollars in legal fees to pay an attorney for representation in a fight he didn’t ask for.
“This is my front yard . . . and now somebody wants to come and take this ground forever,” he says. “I’m opposed . . . I’m just begging for help.
“They want to push me until I can’t afford to fight it anymore,” he says. “At my age I don’t like fights. I’d just like to be left alone. . . . This eminent domain is a terrible thing.”