Andrew Carnegie to York’s A.B. Farquhar: ‘… I am ready to go out and enjoy myself’ 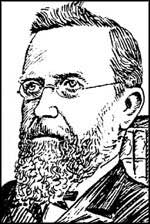 Eighty years after his death, industrial leader A.B. Farquhar’s business prowess is still remembered. The York park that bears his name attests to his community involvement. Now, a national author has remembered him too, including an exchange between Farquhar and Andrew Carnegie. Background posts: Reader seeks Boys Club photo, York: America’s First Capital of Golf? and Pastors denounce Sunday newspaper.

A e-mailer pointed out an exchange in David Nasaw’s biography “Andrew Carnegie,” in which the Gilded Age industrial giant gave York agricultural implement factory owner A.B. Farquhar his comeuppance.
Farquhar mentioned to Carnegie that he was always sure to be in the office by ‘seven in the morning.’
“You must be a lazy man,” Carnegie replied, “if it takes you ten hours to do a day’s work.” ….

Carnegie explained that he hired good men and never gave them an orders, just suggestions.
In the morning, he got reports from these good men and read them, sending out suggestions in return.
With that done, his day’s work was finished.
“… (A)nd I am ready to go out and enjoy myself,” Carnegie told Farquhar.
The e-mailer asserted the Farquhar’s family later suffered because the patriarch lacked interest in the finer things.
The thing is that Nasaw sourced Farquhar’s autobiography “The First Million.” Farquhar was not going to put anything in that self-aggrandizing work that would reflect badly on him. In fact, he used his autobiography to justify his decision to catalyze the surrender of York to the Confederates.
Actually, Farquhar regarded himself – and others saw him, too – as a bit of a renaissance man.
His autobiography tells of his knowledge of the American monetary system, meeting numerous U.S. presidents and teeing off at his own golf course.
Farquhar’s library was extensive, and he started a short-lived Sunday newspaper, York’s first, that kicked off amid controversy about desecration of the Sabbath.
Later in life, he employed a young man to read to him.
Farquhar was controversial at times and his autobiography, published shortly before his death in 1925, shows a man pretty full of himself.
Whether he learned to allow time for the finer things from Carnegie or elsewhere, Farquhar had varied interests and community activities that drew him from behind his desk.
(Farquhar caricature from York County Heritage Trust files.)