A timely story about the end of Daylight Savings Time: Linked in with neat York County history stuff, Nov. 4, 2011 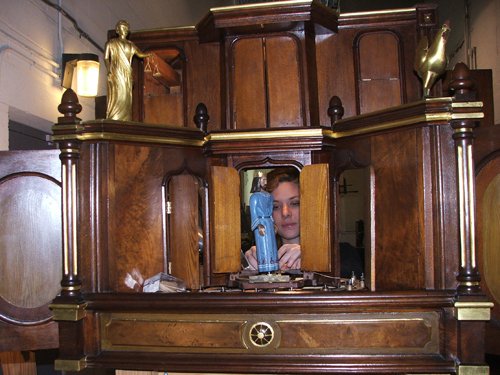 Daylight Savings Time ends this weekend, which means it’s time for Columbia, Pa.’s,  National Watch and Clock Museum to put forth one of its always  interesting projects. The museum sent out a release and photo of  Lily Von Bauyer, seen here, from the National Association of Watch and Clock Collector’s School of Horology preparing the ‘Wonder’ clock for its return to the Hershey Museum. The release, termed ‘timely,’ stated: ‘There’s someone just across the street at the School of Horology overhauling The Ninth Wonder of the World, the Monumental Apostolic Clock from the Hershey Museum.’ Von Bauver is undertaking the intricate work on the clock, built by John Fiester in 1878. ‘It took over 11 years to build is 12 feet high, 3 feet wide and over 2 feet deep. It has many moving figures – 12 Apostles, Jesus, the 3 Mary’s, 2 trumpeters, the 4 stages of man and more,’ the release states. (See additional photo below.) Also of interest: The view from Chickies Rock: Little Pittsburgh on the banks of the Susquehanna River?

A bit more about that iconic billboard at the Emigsville exit of Interstate 83 whose neon lighted wheels appear to turn at night.

The sign is now in the custody American Truck Historical Society   in Kansas City, where it will be restored and displayed.

“This sign is an interesting piece of American trucking history,” said Bill Johnson, ATHS executive director, said in a news release. “We are thrilled to be able to preserve that history for future generation.

Here’s the sign’s history, according to the release:

“The truck sign was one of two erected in the late 1950s by Motor Cargo, Inc., Akron, Ohio. One sign was placed at Motor Cargo’s terminal in Cleveland, Ohio; the other at its York, Pa., terminal. Both signs were shaped like a cabover truck and trailer — 10 feet tall, 3 feet wide and 40 feet long — decked out with neon, painted red with silver trim, and sporting the Motor Cargo Indian head logo on the trailer.

“When Consolidated purchased Motor Cargo in 1960, the sign was repainted in C-F’s green with white and red stripes color scheme.

“Tim Kinsley of Kinsley Construction inherited the sign when he bought the former C-F property in York. In April 2011, Kinsley donated the sign to ATHS, a non-profit organization formed to preserve the history of the American trucking industry. In October, Kinsley also provided a crane and manpower to dismantle the sign and load it onto a flatbed trailer, where it was transported to ATHS headquarters in Kansas City.

“We’re going to have the sign restored with neon lighting to its original glory,” Johnson said.

Blog post of the day, I: John Fisher’s dog thought the bear on the tavern sign was real

Blog post of the day, II:  Buffy’s World has posted another link salad, putting forth the this week’s best of blogs from yorkblog.com.

Forum of the day:  Manchester Township woman has voted for 60 years; how long have you? 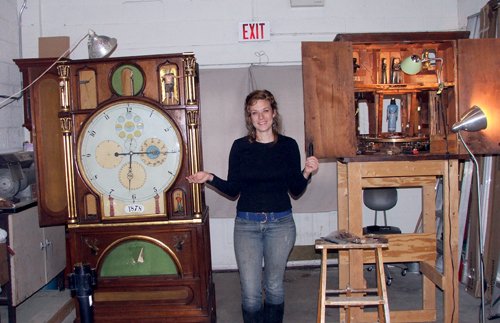 The National Clock and Watch museum release states that the Hershey Museum clock is called ‘monumental’  because of its  size and complexity. It is termed an ‘apostolic’ clock because of its main procession portraying the betrayal of Christ. Lily Von Bauyer is seen with the clock.