A study of contrasts in Bair Station: Defense industry sits in peace with prime agriculture 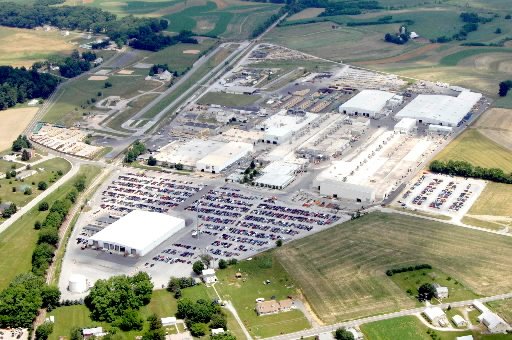 Bair-based BAE, seen from the air in this file photograph, has been in York County, Pa., since 1948 and at this West Manchester site after 1960. Its location forms an interesting contrast – this maker of war machines nestled in this peaceful, largely agricultural part of York County. It’s heavy industry sitting with prime agriculture. But then, the farming village has long been home to advanced mechanization. It was a stop on the railroad. Back to the picture: Notice the test track, upper left, where operators take these machines for a spin. That track isn’t challenging enough. BAE recently asked permission to run some of its rolling stock on area roads. The company’s local fortunes rise and fall with war or the popularity of certain war machines, as is the case with many defense contractors. Recently, the news has been on the down side. The company said it’s closing Fayette County plant. The company remains an important industrial employer, and the York Daily Record/Sunday News follows it closely, giving BAE its own page on ydr.com. So does YorksPast blogger Stephen H. Smith, who gave this brief history of BAE, starting when it was known as BMY or Bowen & McLaughlin York. For a ground level view of the contrast between industry and agriculture in the Bair area, see: York County’s BAE links BMY and Bofors and battered vehicles in Bair.

Many in the local historical community know Terry Downs and his wide knowledge of York County. Now, he is sharing that knowledge via a tour business.

“Glad to report I received a dual booking for Tours of York April 2014 from Southern Maryland group interested in ‘all things York’. My tour business is kicked off! KaCHOW!” he wrote on his Facebook page.

We wish him the best of everything as he helps tell York County’s story.

Maine’s hero: Medal of honor winners have been in the news recently: Gettysburg celebrates Medal of Honor winners.

Which makes this finding of a famous winner all the more relevant. The headline, from the Bangor, Me., Daily News tells the story:  Joshua Chamberlain’s original 1893 Medal of Honor found at church sale, donated to Brunswick history group.

Moonlight maze: And it was Dutchie who flagged this Gettysburg 150 corn maize, Moonlight Maze in Thurmont, Md. Quite an aerial view on this FB page.

Still on the regional coffeehouse trail … .