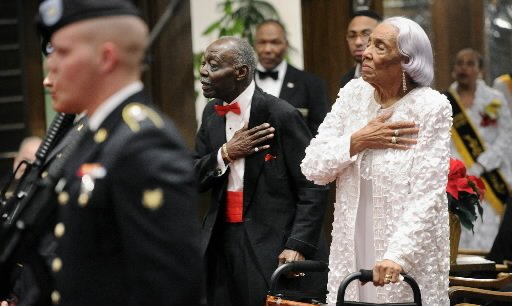 I had the wonderful opportunity to offer a “There is Your Life” tribute to Voni B. and Lorrayne Grimes at a recent event honoring these community contributors at Small AME Zion Church.

How do you sum up the productive lives of two exemplary members of the community in 15 minutes?

Here’s what I did, in edited form, drawing on stories from this blog and Voni Grimes’ book “Bridging Troubled Waters”:

Many of you know a lot about Voni and Lorrayne:
Voni, for example, was:
-Born in Bamberg S.C.
-Came York as part of the great migration from the South in the mid-1920s.
-Grew up in York.
-Served in World War II.
-Gained success at Cole Steel and Penn State York.
-Married Lorrayne on March 31, 1969, his greatest achievement!
-Retired to a life of active volunteerism. In Voni’s case, that included achieving the position of Lions Club district governor.
But I’m going to go a bit deeper providing 10 hopefully quick snapshots about the lives of Voni and Lorrayne.

Some of this I learned in helping Voni write his memoirs, “Bridging Troubled Waters.” I must say that this was an unusual experience to work with Voni, because often when collaborating with someone to tell their story, you set deadlines. And they don’t meet them. But Voni did. One time, he vowed to have a chapter written by Dec. 22 – his birthday – and he did. 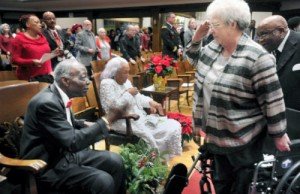 +++
Some broad themes will come of these 10 snapshots:
– The importance of place in Voni and Lorrayne’s lives, especially the city of York, Pa., and buildings in this city.
– That Grimeses are the embodiment of the American dream, and their success has come in many and varied forms.
– The strong marriage and partnership between Voni and Lorrayne. Remember the time – maybe in 2006 – when someone took 200 or toys from the Christmas toy drive at the Voni Grimes Gym? Voni and Lorrayne jointly wrote a letter to the editor praising those who gave gifts in the first place, expressing disappointment in those who took the toys and then praise again for those resupplying them so that 1,400 kids would have toys that Christmas. I imagine it stung those who took those gifts to be the recipient of Voni and Lorrayne’s public expression of disappointment.
– Their Christian faith overlays all these things. My thoughts here go to an observation from the German pastor Dietrich Bonhoeffer, who wrote from prison where he was incarcerated for his opposition to Hitler: It’s not love that keeps a marriage together, but the covenant of marriage that sustains love. In short, Voni’s and Lorrayne’s lives demonstrate a realization that they must be salt and light, as found in the Bible in the Sermon on the Mount: Salt as an earthly preservative of the goodness of Jesus and the light represented by Christ – both offered in an often bleak world.

OK, here are those 10 snapshots:

1. Young Vonidoe Buster Grimes – many people still call Voni “Bus” – stood at a crossroads of Susquehanna and College avenues 85 years ago. That was a short walk from his home with no plumbing nor electricity at 527 Susquehanna. His white friends walked across the street to Noell School, and Voni walked five often-freezing blocks to Smallwood School. Now think about this: the divide, the opportunity gap. Think about the impressive Noell, now Community Progress Council. Early on, Voni attended the old 1870s Smallwood School, replaced by the larger segregated school of the same name in 1931.

Think about young Voni, passing the York Collegiate Institute gym, huddling on ventilation to warm up near the old Hannah Penn Junior High School. Meanwhile, his friends were toasty-warm at Noell. Voni could have been bitter, but he decided to become better.

2. When Voni got to Smallwood – and also the segregated Aquilla Howard School – he noticed something: He and other students were receiving hand-me-down books. He remembers one book with a girl’s name in it. He wrote this in “Bridging Troubled Waters”: “Mr. Hopewell, principal, asked the class to turn to page 22. That page was torn out of my book, so I told him about it. He made a joke of it, telling me to turn to page 11 two times. We all laughed. Through it all, we learned.”

3.  We have this image of the Yorktowne Hotel as a type of bridge between childhood and adulthood here. When he was growing up in York, members of the black community weren’t welcome to stay there. Touring musicians, for example, stayed in the home of Helen Peaco. That prompted a young and determined Voni Grimes to vow he would stay at the Yorktowne someday.
Voni, interestingly, never worked there. A man whom he knew and respected did not hire him, saying he would never move up, he just would get stuck there. Voni worked a lot of places. He hauled baskets for customers at the old City Market, he picked produce at J. M. Miller’s farm and washed dishes at the York Country Club. After his graduation from York High, he moved to Philadelphia to learn his trade of working with sheet metal. It was then he started developing this philosophy: “It is better to have an education and not need it than to need an education and not have it.

He never spent much time in the Yorktowne until he and Lorrayne moved there late in the 20th century.

4. Let’s finish the Yorktowne story. The hotel called itself the center, the soul and the symbol of the community. As a young man returning from the Army in the Pacific in World War II, Voni had a plan. He would invest in rental properties around the city. When he reached 50, he would start divesting of most of them.
A second part of that plan? When he reached 75 years old, he would live in the Yorktowne Hotel. In the 1990s, he asked the by-then-enlightened management for an apartment, and Lorrayne and Voni were provided with a sixth-floor suite. After five years, the press of recreational space for grandchildren and great-grandchildren caused Voni and Lorrayne to seek an apartment with play facilities. “OK, I’ve lived my dream,” he told Lorrayne. “Now, it’s your turn.”

5. Lorrayne is the topic of a full chapter in Voni’s memoirs. In 1968, Voni’s wife, Irene, died of cancer. A renter some months later asked Voni if he wanted to meet a woman in Harrisburg: “I am going to invite you up here for dinner,” the renter said, “and I want you to meet this wonderful lady. Just your type, and she is a Christian.”

Lorrayne and Voni married in 1969. He wrote in “Bridging Troubled Waters: “She is as beautiful on the inside as well as the outside. Everything that I have done for the amelioration of our community or organizations, she has supported me 100 percent.”

6.  More about Lorrayne, from Voni: “My wife has never been a spectator, she has always been a participator.” She has been involved in the York Recreation Commission where she taught poise and etiquette for girls, 10-18. She oversaw a pageant, Miss Fine Brown Frame. She was vice president of American Business Women’s Association. She was grand worthy matron of the Order of the Eastern Star. She’s retired from Children and Youth Services. Just to name a few.

So here’s the snapshot of her everyday community service. There’s a picture that ran in the newspaper of Lorrayne, in her 90s, recording attendance and writing out name stickers at the Generette Family Reunion. Instead of sitting back, there she was greeting people. A participator, indeed.

7. Now this image shows the Grimeses in an upscale home in suburban Springettsbury Township. Their home received a flier from the Ku Klux Klan. “KKK had no idea that I am an African-American living in that high-end community,” Voni said 40 years later. Voni considered asking the distributor to send him the Klan regalia so he could attend their meetings. “Then I would lift that pointed head up,” he wrote, “and give them a big smile.”
Too bad he passed on that notion. The Klansmen’s red faces would have shown through their white hoods.

8. Now comes an image of Voni’s Cadillac. Why does he drive a car of that size? He explained that the York community denied him a home for years. But they couldn’t stop him from buying the best car on the market.

9. Voni and Lorrayne are connectors – you know, people who know everyone and make sure those folks are introduced to each other for the betterment of the community. Author Malcolm Gladwell explains the concept of connectors using a Paul Revere comparison.

The image here is that Revere and William Dawes were to spread word that the British were marching inland on the eve of the American Revolution in 1775. Revere was effective; Dawes wasn’t. Revere knew everybody and everything and was always in the center of things. Dawes lacked these qualities. “When (Revere) came upon a town,” Gladwell wrote, “he would have known exactly whose door to knock on, who the local military leader was, who the key players in town were. He had met most of them before. And they knew and respected him as well.”

10. So adding these nine snapshots together, we have an overall image of a couple with a profound sense of – and love for – place: York, Pa. They’ve achieved success in all kinds of ways, model a marriage partnership that has fostered that success and hold a belief in God that overlays and undergirds everything. So we come to snapshot No. 10, which ties back to the beginning scene, but 80 years later. Voni and I walked from 527 Susquehanna Ave., past the old Noell school with its Community Progress Council sign (Voni was there at the start of this agency), past the old College Avenue Gym – the Voni B. Grimes Gym. The old ventilation system where Voni warmed himself at Hannah Penn wasn’t there, because the school isn’t there. It’s just St. Pat’s parking lot now. We proceeded to the old Smallwood School site, covered by York High’s expansion.

When we were standing near the old Smallwood site, students milled around us. Many young people eagerly and warmly greeted Voni B. Grimes, and he responded in the Clintonesque way of making each one feel important – because they are.

Then one respectfully commented out of Voni’s earshot: ‘There’s that Voni Grimes.’

So I say tonight: “There’s that Voni and Lorrayne Grimes.”

Check out these stories and photos about Voni B. Grimes.

See a photo gallery of this event at YDR MediaCenter.