Fire in a York, Pa., box car filled with apples and beans: ‘Here was a thriller’

York’s Vigilant fire company, captured here in this Picturing York before-and-after slider, has done heroic work for years. But there was a moment in the late 1800s when townspeople bailed out the fire company. Yorkblogger June Lloyd told about the response to a fire in a box car filled with apples and beans: ‘I guess it is kind of embarrassing if your horse-drawn fire engine runs away, is stopped by a collision with your other engine and has to be people-drawn to the fire. That’s what happened to York’s Vigilant Fire Co. in the late 1800s.’ June provided a newspaper account with her 2011 post that led with: ‘Here was a thriller!’ For details, check out June’s 2011 post: York’s Vigilant Fire Engines Collide . And for more about this Picturing York segment check out: Vigilant. Also of interest: York’s worst blaze struck 150 years ago.

A bit more from June Lloyd.

This was the headline on a recent Universal York post: ‘York County history has some dark sides.’

Her post tells about a Klan rally in North York in 1939.

“I admit I’m a cheerleader for York County history. Native Americans, about whom I know much less that I would like, made their homes in this area at various times over thousands of years. In addition, we are not very far away from the 300th anniversary of the arrival of the first European settlers on this side of the Susquehanna River. All these people have contributed to our rich and deep local history.

“It’s not always pretty, however.”

But June would readily agree that such stories haven’t changed the fact that this is a great place to live. Read more from June’s post: Dark sides. 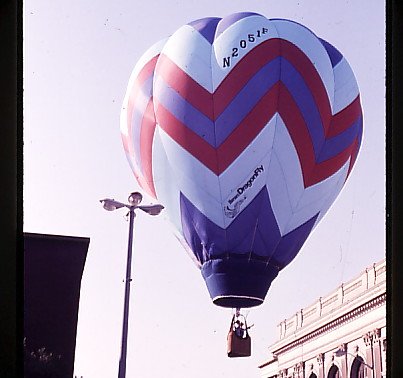 ‘It DID go up!’ Cliff Satterthwaite wrote about a balloon event in York’s Continental Square in 1973. In an earlier post, Cliff’s photo showed the balloon on the ground, and he he was not sure that it ascended. Wonder why we don’t have such exhibitions today in the downtown. Liability reasons? City leaders are sponsoring Second Saturday and other activities to revive Continental Square, which has lost several businesses in the past decade.Also of interest: Continental Square’s history in 5 easy links.

+++
Famous name: Stephen H. Smith writes about John C. Schmidt, chain manufacturer extraordinaire, over at his YorksPast blog.
+++
History mystery: This FB post brought forth an interesting story about a large boat anchor found in the Susquehanna River. Wonder where it is today? Click on comments to find about it: