A billion acts of kindness: York County can – and must – connect with grieving Connecticut community, Part III 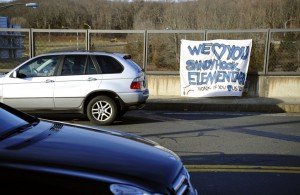 A sheet tied to the Church Hill Road overpass over Interstate 84 near Newtown, Conn., states: ‘We love you Sandy Hook Elementary.’ For more Chris Dunn photographs from Newtown, visit Look blog. Also of interest: Unthinkable in Newtown: York County can – and must – connect with grieving Connecticut community, Part I and Unthinkable in Newtown, Part II.

My York Sunday News column about Newtown, Conn., seems to be an appropriate post for New Year’s Day, as we look ahead to a better 2013.

A double set of doors led into a Dunkin’ Donuts, not far from Newtown, Conn.I entered the first door and held it open for another would-be DD customer who was trailing me by a few steps.

I proceeded to the next door and kept it open. The man behind me had stopped at the first door. He held it open for a third person, who proceeded from the cold outside to the front of the Dunkin’ line inside with a word of thanks.

My accomplice and I returned smiles.

That’s how it was in that area of Connecticut. People couldn’t do enough for each other in the aftermath of the shooting of 26 first-graders and adults at the Sandy Hook Elementary School on Dec. 14.

I was in Connecticut as part of a team of journalists who aided our sister newsroom at the New Haven Register in covering this terrible story.

The experience reinforced several thoughts I had been pondering about such mass shootings and the general state of America.

The cure for our disease won’t come via legislation. Humanly speaking, the solution must come from us.

Which reminds me of the famous story involving British writer G.K. Chesterton.

As the story goes, Chesterton was asked to write an essay on “What’s wrong with the world?”

Now most of us don’t think we’re the source of the world’s problems, although all of us with our imperfections could use a dose of self-awareness in that regard.

But if we accept for a minute that on occasion we do contribute at least a bit to the woes of others, we can see that we can do something to fix those problems.

If, say, 75 million Americans would try a little harder one time a month to reach out to those in need, we’d increase the reservoir of kindness by at least a billion. Concentrate those efforts toward young people and people with mental illnesses, and there would be even more rewards.

Larry Crabb and Dan B. Allender wrote in the book “Encouragement” about a time when one of them spoke publicly – perhaps it was a prayer – in a church. He stuttered and stumbled and was red faced and humiliated. But an adult came up to him afterward and told him that what he said was most impressive.

They wrote about that moment years later.

The point is that we don’t have to wait for legislation or other people to fix what’s wrong with the world. Because they won’t.

It’s not always easy to do a bit more.

A couple of years ago, I was working with a York County elementary school class on a history project. After I was done with my part, the teacher invited me to return to the school to receive appreciation from the students.

That day was fully scheduled, and I told the teacher I just couldn’t make it.

She later sent me several items of thanks that the students had prepared.

Working in Newtown, I thought about that moment, the students’ eagerness to say thanks, and my inability to fit another thing into my day.

If that were to happen again today, I would make the time.

Making the time there.

Pretty soon, we’re talking about a billion acts of real kindness across America.

Of course, emotions around Newtown were running in all directions.

When a YDR reporter, fresh from York, delivered a change of clothes for me in the hotel where we were working, the person behind the front desk initially declined to accept the bag.

The employee was just not sure what was inside the soft suitcase – evidence of the general uneasiness felt across America.

And some readers might wonder if the presence of our journalists wasn’t compounding the misery in Newtown.

That could be the case of a town shunning the mass media but welcoming individual journalists.

Our journalists were treated cordially – not always, but generally – in their work around Newtown.

Many Newtown residents were appreciative that we were telling the stories of that tragic moment and the community’s proud response.

A clergyman from a Newtown church sent a thank-you note to a member of our reporting team from the New Haven Register.

“I am so grateful to you for reporting those points of the homily I preached,” he wrote, “because the words of those saints and spiritual giants I’m sure will bring tremendous solace, relief, and healing to so many who are looking for just those things.”

This national moment even drew together police and reporters, two groups known to disagree.

John Hilton, a YDR reporter, was traveling to his assignment in Newtown, when a police officer pulled him over for speeding.

The police officer asked John where he was going, and John told him.

He handed John back his license, without a citation, and said, “Good luck up there.”

A billion additional acts of kindness in 2013.

But they would make it better.

After the column above ran in the York Sunday News, I received this wonderful note from a reader:

“I found an interesting surprise in your article this morning.  Probably close to 30 years ago, I read (skimmed?) the book, Encouragement, I think as part of a small group at a church I was attending at the time.  I didn’t remember much about the book except for the story you mentioned, and it sat around on one shelf or another until recently.  After the Sandy Hook incident, I was looking for something “encouraging” to read and noticed the book.  I read a little and then put it on another (closer) bookshelf.  But now that you have brought it back to my attention, I may try to read it more thoroughly.  I wasn’t sure if you had the book or were telling the “stuttering” story from memory, so I’ve attached it … .”

Other YDR journalists’ write about their experiences in Newtown