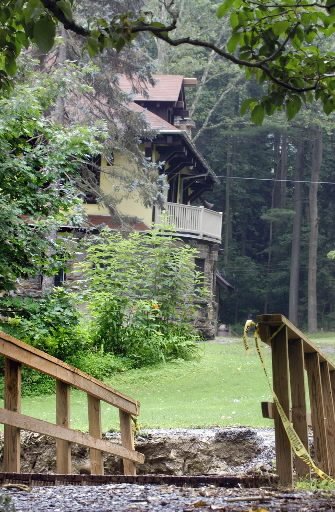 Indian Steps Museum, along the Susquehanna River in southeastern York County, Pa., is seen several years ago after heavy rains damaged the grounds. John E. Vandersloot, a York attorney, built what would become a York County landmark, in stages starting from 1910 to 1912. Also of interest: On York County parks, Susquehannocks and carved river rocks.

Don Linebaugh is  director of the University of Maryland’s Historic Preservation Program.

He’s a York County resident and active in the Stewartstown Historical Society. And he traveled to Glen Rock this week to talk about another area of expertise, John E. Vandersloot and his retreat, Indian Steps Museum.

The Glen Rock Historic Preservation Society was interested in Vandersloot and his property because the future York attorney was born in 1869 in that southern York County borough.

So here are 7 points from Don Linebaugh’s presentation about Vandersloot and Indian Steps, which the professor assessed as “an amazing place, or space, in York County.” 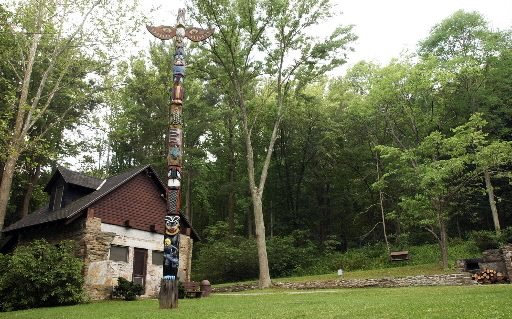 Indian Steps drew its name from a pathway carved in rocks leading down to the nearby Susquehanna River. Rising water from the construction of Holtwood Dam submerged these rocks, something that attorney John Vandersloot noted. In lawyerly fashion, he filed suit against the power company building the dam. And he won an award of $18,000 in 1918.

2. The main Indian Steps cabin or building can be interpreted as a country retreat for Vandersloot, as an American Indian Museum, and as a fraternal clubhouse.

3. Vandersloot, who died in 1936, incorporated many of the his artifacts found on the grounds into the building’s designs. So there are concrete panels bearing arrowheads and artifacts artfully pressed to form the shapes of turtles and birds. Combine that with other special architectural features such as stained glass windows from York artist J. Horace Rudy and a round room or kiva, and Indian Steps, indeed, offers amazing space.

4.The lawyer/owner became involved in a movement in his day called Pan-Indianism, promoting unity among various American Indian groups. This resulted in what became a fraternal group under the Tipi Order of America that could be described as a cross between the Boy Scouts and the Masons. Indian Steps became a kind of clubhouse for members of this group  and groups of York lawyers, spawning colorful stories remembered today. 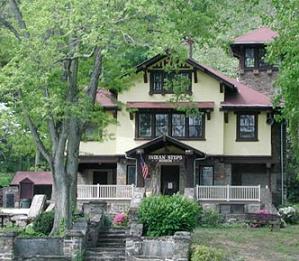 5. Playing on this Pan-Indianism theme, Indian Steps combined the kiva, representative of Indians in the American Southwest, the tipi, Plains; and the totem pole, Northwest Indians, among many other eclectic forms in architecture and structures on the grounds.

7. Linebaugh indicated that the building is an artifact worthy of study. People can look for – and read – evidence at Indian Steps that point to various moments in history and architectural features.

A member of the Glen Rock audience observed that borough residents should take special note of Indian Steps and Vandersloot.

“As a native of Glen Rock, his collections are on display,” he said.

Indian Steps on YouTube. And check out this successful application to place Indian Steps Museum on the National Register of Historic Places.