7 stories about Fastnachts and other York County delicacies 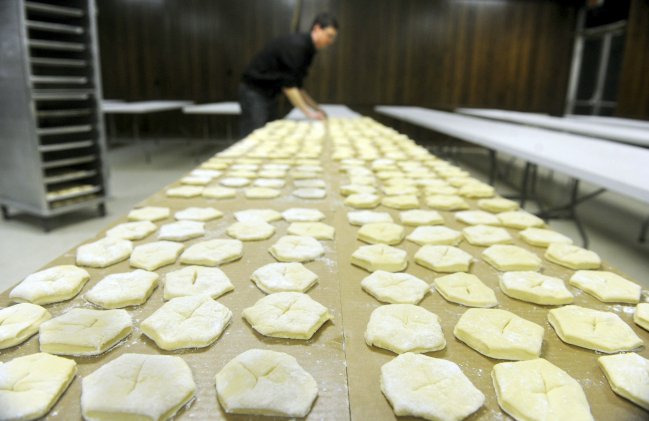 What do raw Fastnachts look like? Todd Kister, at Manchester Union Fire Company, gives a demo. He was there as part of preparations for a Manchester Christ Lutheran/Zion View Quickel Church annual Shrove Tuesday Fastnacht sale. Also of interest: Harleys and chicken corn soup: The sound and taste of York County.

Food – particularly of the Pennsylvania Dutch variety, is a big part of York’s past. Hog maw is top of mind in that category.

And Fastnachts are up there, too, especially on this day before Lent – Shrove Tuesday – when families used up lard, yeast and sugar in preparation for fasting.

And so we have Fastnachts and Fastnacht Day.

And we have 6 more items about that day and Pennsylvania Dutch food:

2. ‘Hey Jim,’ the York Daily Record’s Sonya Paclob said, ‘When I saw your blog post, it reminded me a video I did with Public Opinion. I thought it could be on interest for you. Enjoy.’

3. This was the blog post that Sonya viewed: Fastnachts are a York County delicacy. But how are Fastnachts different from donuts? Find out: Fastnacht.

4. The YDR’s Jason Plotkin had some fun with the word ‘Fastnacht.’

5. Not all food around here is made of flour and sugar. How about this story about potatoes and salt – snack foods. And the difference between Snyder’s of Hanover (York County) and Snyder of Berlin (Adams County).

6. Here are scores of stories and photos about food and eating in York County’s past: York Eats: Hog maw & such.

7. I put a call for recollections about coffee soup, another old-time York County dish, on YDR’s FB today.