Lincoln links: Check out these 6 leads to York/Adams stories about Abraham Lincoln 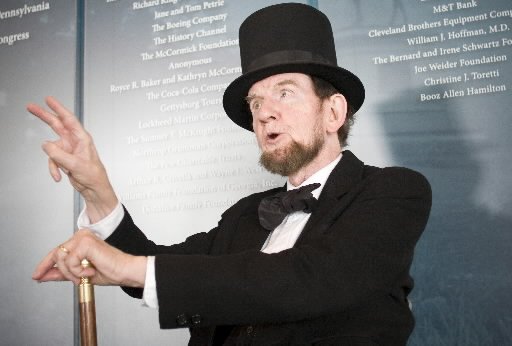 The appropriately named James Getty is the best known living historian portraying Abraham Lincoln in southcentral Pennsylvania. Here, he speaks with visitors at the Gettysburg National Military Park Museum and Visitor Center in 2010. The Hanover Evening Sun reports that Getty was originally a choral music director from Bloomington, Ill. He moved to Gettysburg in 1977 to impersonate Lincoln. Hal Holbrook’s portrayal of Mark Twain inspired him. “It gave me the idea that one man can create an evening of entertainment,” Getty told the Evening Sun. (See additional photograph below.) Also of interest: Check out these numerous stories about Abraham Lincoln and York County.

The release of the film ”Lincoln” provides us with a moment to share popular yorktownsquare.com links to local stories about Abraham Lincoln:

1. This is the most popular Lincoln link on yorktownsquare.com: Political foes in York, Pa., not impressed with Abe Lincoln’s Thanksgiving proclamations

3. Thaddeus Stevens’ taught school in York – at the York County Academy – before his fame as a lawmaker/abolitionist.

6. York countians didn’t particularly like Lincoln and voted that way: Would York County, Pa., back Abraham Lincoln’s presidency today? (This post also explains Lincoln’s two visits to York County (one alive and one by his funeral train) and a third visit in which his train arrived but the president-elect was not present.)

The annual Gettysburg Address ceremony will be live online on Monday. 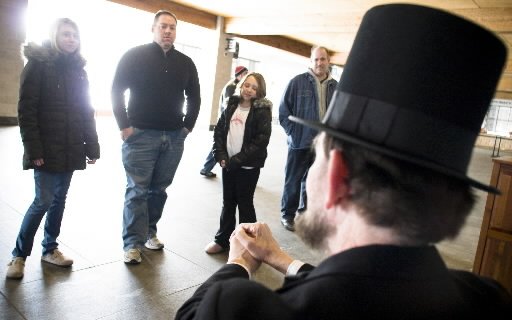 James Getty practices his craft as Abraham Lincoln at the visitors center in Gettysburg.