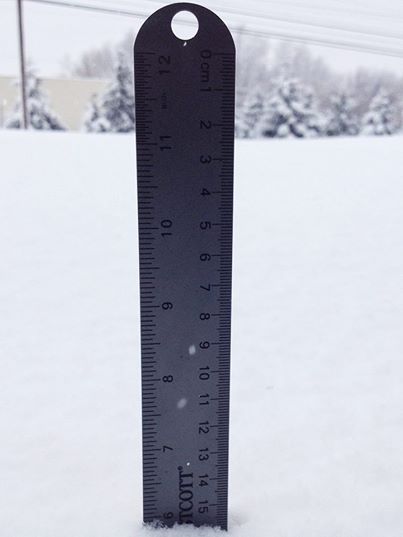 A pica pole marks the spot in a snowstorm. This represents a new role for an old rule. The metal ruler was part of the stuff most newspaper journalists had in and around their desks in the pre-computer days when they did page production by hand. Some are still around the YDR newsroom, obviously, but they’re largely unused. Largely, that is, except when deployed in the measuring of snow. (See how the pica pole spawned other snow measurement around York County, Pa., below.) Also of interest: Web, mobile, tablet technology causes revisions in York, Pa., news media history.

Modern newsrooms are now in the business of telling readers what is happening right now in their communities.

So all this creates a big challenge when facing, say, the slew of snowstorms that have afflicted the region this year.

Technology can help us to be current up to the second.

2. York County compiles a rolling live incident log, which shows incidents that often demand fire and police response. The log shows, among other things, the location of transformer fires. Those point to areas that might be without power.

3. If you want to see what’s happening outside at a single spot, check out the weather cam pointed past the YDR parking lot toward the West Manchester Mall.

4. What we call a “ScribbleLive,” also known as a live blog, captures Facebook, Twitter and other weather-related social media posts across the region.

5. Back to that pica pole. Notice below how YDR Facebook posts spawn engagement from community members. One way to tell what is happening right now in a community is to ask for readers to help.

In covering the news, we’ve come a long way from pica poles and once-a-day press runs. Our coverage is now ongoing with continuous deadlines.

Check out these stories and photos about bad weather from York County’s past.