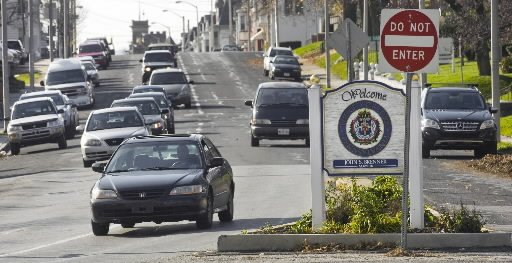 York, Pa., Mayor Kim Bracey didn’t like the looks of this conflicting message – welcome v. do not enter – so she successfully asked PennDOT to fix it. The entry as it appears today is shown in another photograph made by the York Daily Record/Sunday News’ Paul Kuehnel below. Also of interest: York’s one-way street pattern put in place to combat post-World War II traffic congestion.

That sign that welcomes westbound motorists on East Market Street to York?

It’s more than a sign. It’s a symbol of the city’s hospitality.

Well, here are 5 quick facts about the sign, courtesy of the most recent story in the ydr.com series ‘Exit Interviews’:

– Made of: Sandblasted redwood

– Made by: Impressive Signs, Spring Garden Township. The nearby company maintains the sign, too.

– Endangered by: An errant  motorist and also thieves who stole the finials – the golden balls – from atop its posts.

What is the image on the sign’s back?

“Exit Interviews” tells you, and  tomorrow’s yorktownsquare.com post digs into a bit deeper, with photo! 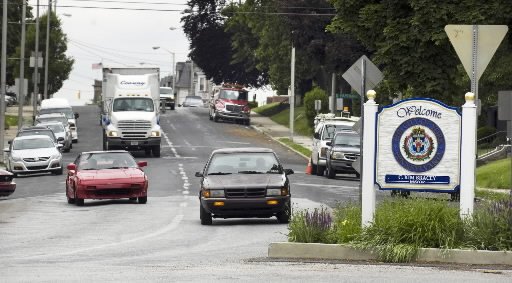 Now that’s a bit more like it. No mixed message in this frame, but it’s still there: The sign has been moved to the right. City officials say they hope to change this piece of East Market Street to two-way.