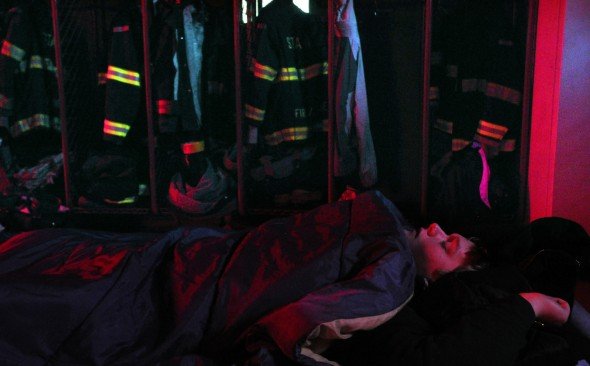 What do firefighters do after serving their communities all night in the middle of a storm? As documented by York Daily Record/Sunday News photographer Jason Plotkin, they crash. Jason followed Wrightsville firefighters all night through the height of the storm and produced a series of photographs and a short reflection about his community (See four other memorable photographs below.) Also of interest: All bad weather posts from the start and Check out 10 more links to stories, photos of Sandy, present and past bad weather events.

I’m sitting here recalling many moments of pride in our journalists and their journalism in covering Sandy this week.

I remember Tim Stonesifer dripping as he walked into the office from his journey along waterlogged backroads to Glen Rock.

He was out as the storm peaked, documenting a community coping with rising waters and flooded homes. Acting on a tip from photographer Paul Kuehnel, he told a story about Wetzel’s store’s act of kindness. The Glen Rock grocery stayed open without power to serve its customers. For his part, an equally soaked Paul Kuehnel never came into the office, working 12 hours from his car, shooting still photographs, videos (see his work about Wetzel’s) and gathering news.

Buffy Andrews was at home fighting a cold as the storm was gathering strength. Before and after visits to the doctor, she used a  tool called Geofeedia to capture information from social media in York County and along the Eastern Seaboard. Her Buffy’s World blog posts with that information were wildly popular during the storm. She literally covered the storm from her sickbed.

Cathy Hirko came into the newsroom on her day off on Sunday to pull together coverage and the staff. “Many folks will be depending on us to cover the local news,” she wrote in a note to our staff published over at YDR Insider. “That’s exactly WHY we do what we do.”

And Jason Plotkin worked overnight documenting the contributions of  Wrightsville Fire Department volunteers in the middle of a storm.

“But for now. In this moment. In this town.

Ditto about this town and the journalists at the York Daily Record/Sunday News. 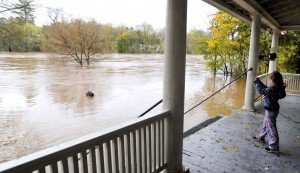 Scott Snyder lives along the Conewago Creek in East Manchester Township. This was the scene from his front porch, as photographed by the YDR’s Eileen Joyce. 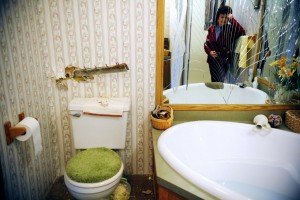 Carolyn and Kendall Coleman live in a mobile home in the Tall Oak Estates mobile home park in Dover Township. An awning rod blew from another mobile home and poked through their bathroom wall. The couple joked that they would keep the rod in place to use it to store toilet paper. York Daily Record/Sunday News photographer Chris Dunn captured this scene. 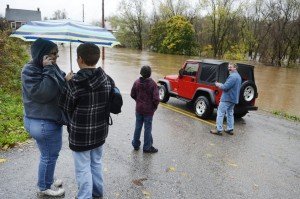 You’ve got to try to maintain a sense of humor even in the middle of a storm. YDR’s Kate Penn captures these York countians checking around Halloween Park on Conewago Creek in Conewago Township. 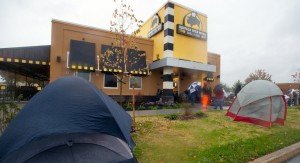 Every bad weather event has inexplicable moments. This was Sandy’s finest – or worst. The YDR’s Paul Kuehnel photographed the tents of those awaiting the opening of Springettsbury Township’s Buffalo Wild Wings and their free chicken wings for a year.