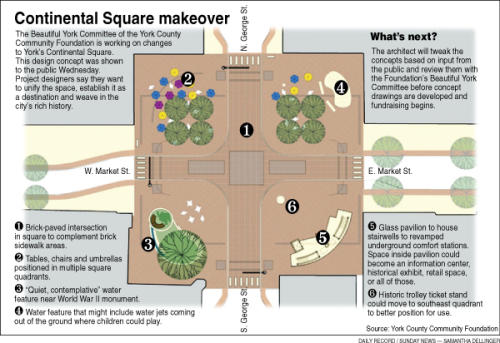 Proposed Continental Square renovations in York are shown on this ydr.com graphic. The renovations are designed to draw people to the square, which has suffered from the loss of businesses over the period of decades. “It’s not just about beautification, it has to translate to a destination,” designer Frank Dittenhafer said, in a ydr.com story: Brick streets, water features, comfort stations may be in future for York’s square. (See additional photographs below.) Also of interest: Revised map of York, Continental Square provides snapshot of how far we have come

The design of Continental Square, offered by Frank Dittenhafer of York’s Murphy & Dittenhafer architectural firm, will attempt to draw people there. The city’s rich history will be part of that draw.

Here’s a thought. Perhaps these improvements can be in place by York City’s 275th anniversary in 2016. (York was founded in 1741.)

Given all this, we offer up some links pointing to that history: 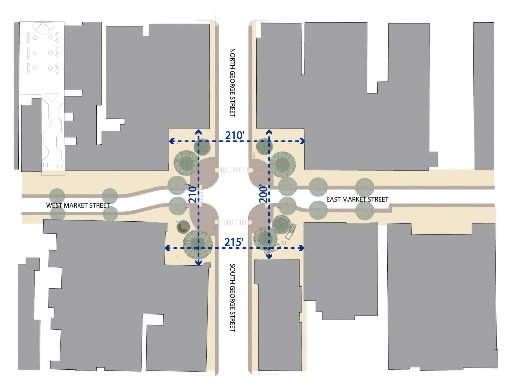 This diagram shows that York’s Continental Square isn’t quite square.

2. Rebel entry into York before Battle of Gettysburg was gut wrenching, community shaping

3. Once pulled down, York’s Centre Square market sheds won’t go back up.

4. When did the square in York change its name from Centre to Continental?

6. How one spot in York County, Pa., tells much about what is going on around there 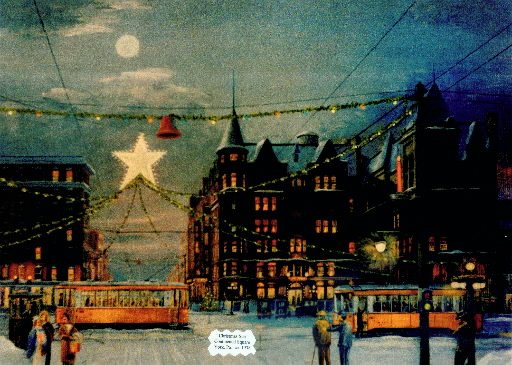 This photograph shows York’s square at its zenith. It’s circa 1938, months before the last trolley rolled through the square.