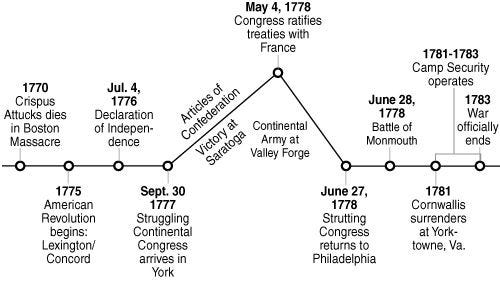 This graphic outlines the scope of the American Revolution, from its buildup starting with the killing of Crispus Attucks and four others in the Boston Massacre to its end in 1783. It puts the Fourth of July in its historical context.
Posted by Jim McClureJuly 4, 2010June 27, 2020 American Revolution, Archives, all posts, Events, Explanations/controversy, Famous York visitors, Genealogy/research, War

Continental Congress struggled into York, and delegates strutted back to Philly 9 months later

I used the graphic above as part of a presentation on the Declaration of Independence and York’s role in the American Revolution to Rotary Club of York-North last week.
It as an attempt to show the length and breadth of a long and broad war, and how the nine-month period York visited here figured in the whole thing… .

The short answer is that it was a huge moment – a time that Continental Congress struggled into York Town after being pushed out of Philadelphia by the British. A combination of an adopted Articles of Confederation and a Continental Army triumph in the Battle of Saratoga (N.Y.) helped bring France on board.
Then came Spain and the Netherlands, and the rest, as they say is history.
Congress strutted back to an evacuated Philadelphia in late-June 1778.
The thing that surprised this very responsive and engaged Rotarians the most – a common surprise, I might add – is that signers didn’t pen their names to the familiar, beautifully embossed Declaration of Independence immediately.
The document read in York Town – and in towns across the Colonies – was the Dunlap Broadside, printed in Philly at the time of its adoption on July 4, 1776.
Thank heavens for the printing press, which turned out hundreds of copies vs. the laborious, month-long task of penning the document we love so much.

The Dunlap Broadside carried the names of John Hancock and Charles Thomson. The signers, included York County’s James Smith, attached their names to an embossed Declaration about a month later.Also of interest:

– All American Revolution posts from the start.

– The information above, presented here in skeletal form, is fleshed out in my book “Nine Months in York Town.”