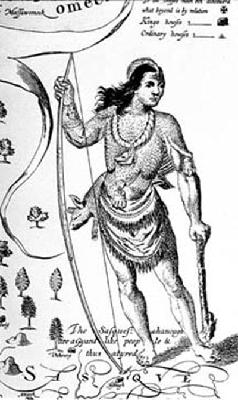 John Smith was an artist as well as an explorer. He drew this Susquehannock Indian after his visit to the mouth of the Chesapeake Bay in 1608. Background posts: John Smith gave Susquehannocks their name, American Indians’ carvings almost forgotten treasure and Project uncovers hidden American Indian mural.

In the past two “Connections” editions, we have assembled multi-page displays showing the Murals of York and paintings of key figures with York connections in the American Revolution.

For this year’s special publication, our spread will show 20 images that help define York County… .

This special display comes in “connection” with the 400th anniversary of John Smith’s visit to the region where the Susquehanna River flows into the Chesapeake Bay.
John Smith’s drawing above of a Susquehannock is the first image, and we’ll run the rest in York Town Square over the next two weeks.
Here is the description:
In plain view: This drawing of a Susquehannock Indian fills a corner of a map drawn by Captain John Smith. Smith, friend of Indian princess Pocahantas, meets the Susquehannocks in his exploration of the Chesapeake Bay and Lower Susquehanna River in 1608 – 400 years ago. He describes them as giants (their gravesites indicate that they were not), claiming one warrior’s calf measured 27 inches around. It was Smith who called them “Susquesahanocks,” a Delaware Indian term meaning “muddy river.”
Behind the scene: The Iroquois defeated the Susquehannocks, weakened by epidemics and alcohol, circa 1675. It is about this time that the Susquehannocks built villages on sites above present-day Long Level in Lower Windsor Township. They later join with other groups and become increasingly known as the Conestogas. When European pioneers settled west of the Susquehanna after 1730, the Indian threat was minimal. Settlers could largely clear land and build their farms without looking over their shoulders. York County was off to a good start.
Further details: Barry Kent’s “Susquehanna Indians,” (Pennsylvania Historical and Museum Commission, 1993) tells the story of York County’s predominant Native American group.
Posts in this series:
– 400 years ago, John Smith explored Chesapeake Bay – 1/31 iconic images
– Declaration signer James Smith tops York County patriot list – 2/31 iconic images
– Going to market a longtime York County pastime – 3/31 iconic images
– William C. Goodridge: From slavery to success story – 4/31 iconic images