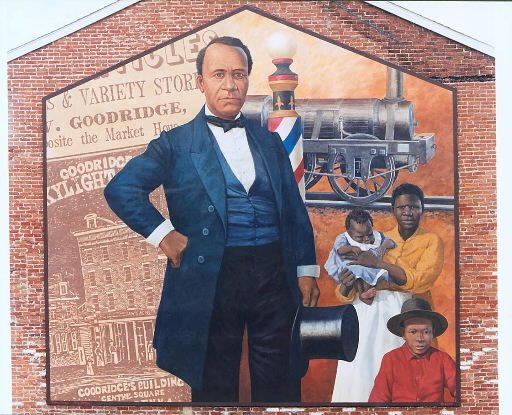 This mural of 19th-century York, Pa., businessman William C. Goodridge greets motorists and pedestrians as they head east on West Market Street. Among other businesses, it depicts Goodridge’s rail venture, believed to have been deployed as part of another transportation business – the Underground Railroad. Background posts: Freed slaves often faced return to bondage, Amanda Berry Smith: ‘God’s image carved in ebony’ and A short test of your black history knowledge, II.

This image of William C. Goodridge, freedman and businessman, is another in the York Town Square series on important photos that tell York County’s story… .

In clear view: This mural shows former slave William C. Goodridge standing proudly in front of some of his many accomplishments in York, Pa. – his five-story business, barbershop and rail line. It also shows Goodridge as the infant son of a slave and then as a lad beginning his indenture.
Behind the scene: Goodridge’s success as a former slave in 19th-century Pennsylvania attests to his business acumen and, no doubt, unflinching support from some in a York community sometimes unwelcoming to freedman. He drew on that support after his son, Glenalvin, a pioneering photographer, was incarcerated for rape. Even in the middle of the Civil War, many in the community leadership successfully petitioned Pennsylvania Gov. Andrew G. Curtin for a pardon. His retail enterprises also are representative of the growth of the merchant-class in mid-19th-century York County.
Further details: The York County Heritage Trust administers the 18 large-scale Murals of York, painted between 1995 and 2002 to promote tourism and economic development. The colorful panels can be viewed at Murals of York . See the post If you want to see the Murals of York up close … that places the murals in historical perspective.
Posts in this series:
– 400 years ago, John Smith explored Chesapeake Bay – 1/31 iconic images
– Declaration signer James Smith tops York County patriot list – 2/31 iconic images
– Going to market a longtime York County pastime – 3/31 iconic images
– William C. Goodridge: From slavery to success story – 4/31 iconic images