4-H in Pa. has a century’s worth of candles on its birthday cake: Linked in with neat York County history stuff, Aug. 13, 2012 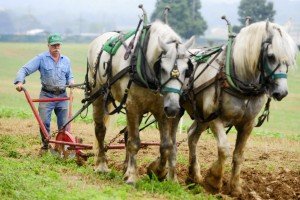 4-H is observing its 100th anniversary in Pennsylvania this year, and the 4-H program is remains active around agriculturally-minded York County. The annual 4-H Fair, for example, concludes today. (See photograph below.) And 4-H’s building near Bair Station in West Manchester Township is a busy meeting place. Here, Pete Byrne guides a an 1878 plow behind Percheron draft horses in a plowing demonstration in July. That demo was part of the Menges Mill Historic Horse, Steam and Gas Show. For more about 4-H in York County, check out 4-H isn’t just for farmers. Also of interest: West Manchester book contains several gold coins.

Some of yorktownsquare.com fans might have noticed that I have additional oversight as East Region editor for Digital First Media.

That means that I have broad editorial oversight for 24 daily newsrooms up and down the mid-Atlantic region and the Northeast.

So I’ll be challenged to post each day on here, as I’ve done for five or more years. I’m heartened by Cannonball’s Scott Mingus, whose position with Glatfelter requires him to travel. The travel actually creates evening motel time for him to work on his various Civil War projects.

We’ll see if I have that discipline.

I know I’m going to try to keep up the daily posts, but if not daily, they’ll be up here most days.

Delaware is more than beaches: Yes, it is. Check out this story, with photos of this guide about attractions throughout Delaware. Well, inland Delaware anyway.

Carroll County, Md., history: Carroll County is just over the Mason-Dixon Line from York so their history is our history When plans are out there to tear down a historic building, an old store, in New Windsor, yorktownsquare.com readers want to know. Check out this Carroll County Times piece, Brownie’s Korner.

Forum of the day,I: York County is seeking to spend about $11 million in grants and loans to erect a building on county property that would house Penn State extension and other agricultural agencies: http://bitly.com/NnnEQ7. Think it’s a good idea for York County to put up a building for such use? Background: 4 images show the the rise and fall of venerable A.B. Farquhar Co.

Forum of the day, II: Jimmy Bear, a regular contributor over at The Exchange, has started a thread: Do you have any special memories of York city or county parks/playgrounds? 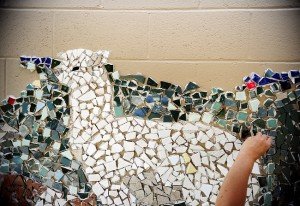 This mosaic project appears on a wall in the York County 4-H Center’s education classroom. Each year, two animals are added, according to a ydr.com story. This year’s fair observes 4-H’s 100th anniversary in Pa.