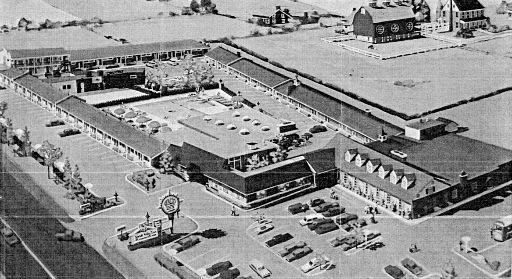 In its heyday, the York Valley Inn along Route 462 played host to a range of functions – from car shows to wedding receptions. The fire-damaged resort along the old Lincoln Highway may soon fall to a wrecker’s ball. (Update: It came down in 2008.) Background posts: York Valley Inn: ‘What a mess.’ and Olde York Valley Inn confused with historic predecessor.
York Daily Record/Sunday News reporter Brent Burkey made an astute observation in his story on the proposed demolition of the deteriorating York Valley Inn.
A York Valley Inn has sat along Route 462 or its predecessors since shortly after settlers started arriving west of the Susquehanna River after 1730.
An earlier inn served as a watering hole for travelers from the 1730s to the 1960s. Of course, it had various names but was known most recently as the York Valley Inn or the Old York Valley Inn.
That distinguished the old structure from the newer resort built in 1958, the one that faces the wrecker’s ball… . 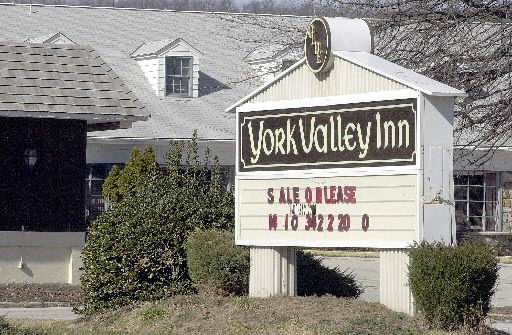 The York Valley Inn in 2000.
.
The original inn may outlast its successor. After it was dismantled, part of it was relocated to Susquehanna Memorial Gardens where it serves now serves as the cemetery office.
Burkey’s story follows:

Contracts are out for the demolition of the former York Valley Inn in Springettsbury Township, but it is too early to tell what might go in the place of a long-ago hub of York County social life.
When the building comes down, it will mark the first time since shortly after white settlers came to York County a York Valley Inn won’t stand along the Lincoln Highway or its predecessors in what is now Springettsbury Township.
Debt, time and a fire this year forced the demolition.
An Olde York Valley Inn first was built in the 1730s near where Wal-Mart now stands on East Market Street, said Lila Fourhman-Shaull of the York County Heritage Trust.
The inn saw meetings by delegates of the Continental Congress, among other events, and was moved to Susquehanna Memorial Gardens sometime in the 1960s.
Slightly before that, construction began on another inn, this time in the 3800 block of East Market Street. It opened in 1958.
It quickly grew to become a self-contained resort with hundreds of guestrooms, a game room, saunas and a heated swimming pool.
The inn closed in the spring of 1998, reportedly under a mountain of debt. A fire in September nearly destroyed what was left.
A fire chief at the time of the fire called it a “rundown building.” Only quick work by firefighters saved most of the structure.
But that isn’t saving the site from the wrecking ball.
Springettsbury Township manager John Holman said it is too early to say what, if anything, might go in the inn’s place. 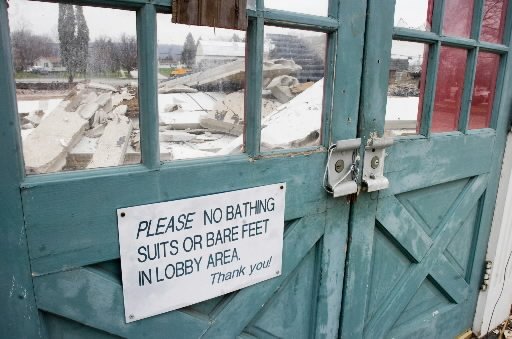 Guests may not come into the York Valley Inn with wet bathing suits. But this sign in 2008 no longer mattered. Demolition around it took down the building as evidenced in the reflection, and all that remained were two walls and, according to the York Daily Record, a staircase to nowhere.