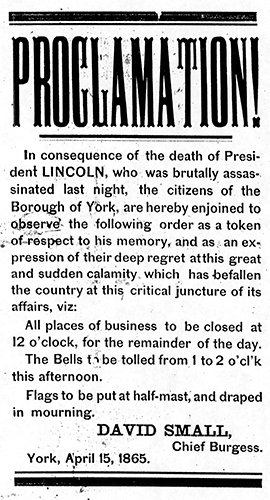 York County, Pa., learned about Abraham Lincoln’s death later the next day after the Friday, April 14, shooting. Chief Burgess David Small issued the protocol for the day, as seen on this handbill. Also of interest: Lincoln’s funeral train in York, Pa.: ‘He was crucified for us.’

Then came that fatal shot at the hand of John Wilkes Booth.

Koontz, a U.S. Treasury Department worker, wrote to a friend in Dillsburg to be on the look out for the gunman, who attended school in York County as a youth.

According to East of Gettysburg: 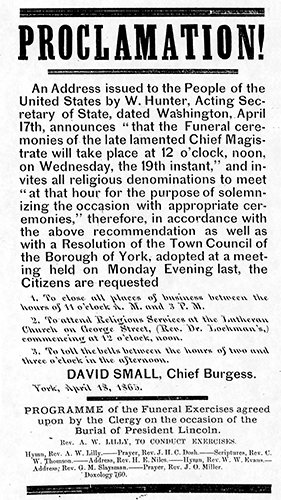 “Booth is just as likely to be in York County as anywhere else,” Koontz informed blacksmith William Weaver, “and if you see a suspicious character about five feet, eight inches tall, with black hair and eyes, good looking, have him arrested.”

Booth was not in York County, but in Virginia, where he was tracked down and shot 12 days later.

So just as York County was feeling the grave impact of Abraham Lincoln’s death 150 years years ago, residents also had reason to fear that his slayer could be nearby.

As in the days of the American Revolution in York County and elsewhere, those were times that tried men’s souls. 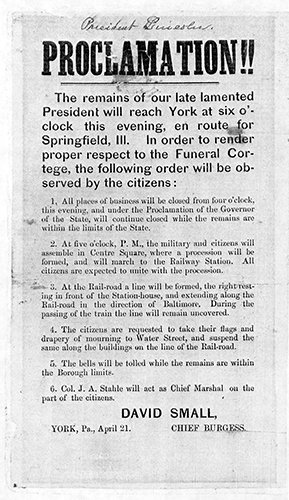 David Small lines out activities in York in preparation for the funeral train carrying the body of Abraham Lincoln. The steam train stopped there, took on water, and proceeded to Harrisburg.
+++ 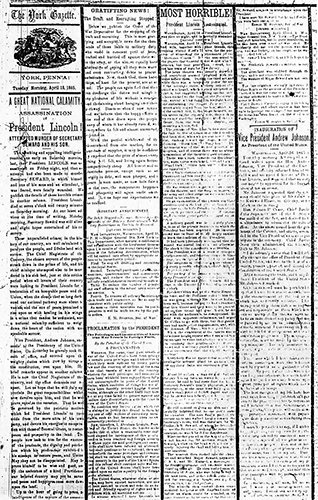 David Small, chief burgess, found time that week to report in his newspaper, The York Gazette, about Lincoln’s death. Small’s Democratic Gazette was a virulent foe of Lincoln throughout his presidency. The scoring was common in newspapers of that day in designating solemn days or events.