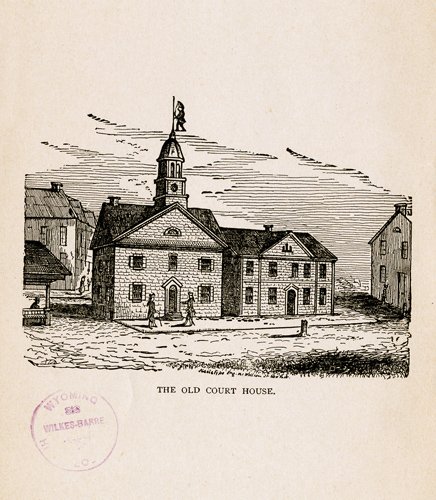 These structures occupied York, Pa.’s, Centre Square from the 1790s until their demolition in 1841. From left, the market house, replaced by two new houses in the early 1840s; York’s original courthouse, replaced by a courthouse on the East Market Street site of its successor; and the old State House, built to handle a growing counties business in the 1790s. The image appeared in book, ‘York’s Centenary Memorial,’ published in 1887. Also of interest: In 2012, York City will be 125 years old. Will it celebrate its birthday?

The reserve shown by many city officials in keeping the historic Trinity United Methodist Church standing comes in contrast with past moments when leadership rushed to pull down such structures.

The 1960-era was the heyday of such demolition efforts, as such landmarks as the old Children’s Home of York, City Market, Springdale Mansion and York County Academy came down. Indeed, the Academy, a forerunner to York College, would have been celebrating its 225th anniversary in 2012.

The seeds for such destruction were put into the ground well back in York’s past – 1841, in fact. That was the 100th anniversary of York’s founding, and the year that York’s original courthouse was knocked down.

Despite a new courthouse east on Philadelphia Street, many regretted this act, as demonstrated by this excerpt from 1887’s ‘York’s Centenary Memorial:

“The Court House in Centre Square, since demolished by sacriligious hand, rang with the eloquence of the early patriots, and her walls looked down upon the labor attendant on a Nation’s birth. Our homes were graced with the presence an Adams, a Hancock, a Laurens and a Gates.

“Those who saw this act of vandalism, as we now consider it, though done in daylight and under the forms of law, will never forget it. The consecrated spire, with its semblance of the knightly hero at its summit, was pulled down by ropes, and the ‘little man’ on top described a circle in his fall and ran into the doorway and penetrated the ceiling of the ancient court room that had heard the voices of revolutionary patriots, as though protesting against being taken off from his historic perch.”

A market house that had joined the court house in the square came down, too, and two new sheds went up where George and Market streets crossed.

But by 1887, these sheds, described as upside down canal boats, were tottering, smelly and, well, getting in the way of the shipment of people via trolleys and products via wagons.

Despite the kind memories about the old Centre Square Court House, city fathers showed no mercy toward the market houses, as these excerpts from “Centenary Memorial” show:

“Finding, however, that a small majority were determined to thwart, if possible the action of councils and as there was a possibility of an injunction being applied for, legal quibbles laid, and consequent expense in costs and lawyers’ fees, probably equal to the revenue from the old sheds and much more, it was decided to remove them at once, and thus end forever the long talked of question and save time and trouble and expense to the city.”

This cowboy-like actions are a prime example of what I call unprincipled pragmatism that sometimes emerges in York County. It happened in the surrender of York to the Confederates about 25 years before.

About 80 years later, those tendencies emerged when the city shut down investigations in the deaths of a young city police officer and a young black woman in race rioting. That brought out the comment from a later York mayor:  “Everyone knew who was involved. But everyone thought it was even. One black had been killed and one white – even.”

When city officials perceived the need for parking or made other excuses in the 1960s, historic buildings came down.

If you can show disregard for due process in demolishing historic structures in 1887, you can justify such a mere seven decades later. 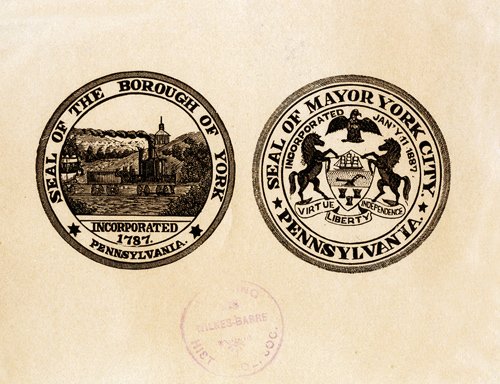 The seals for York borough and York city, as found in ‘York’s Centenary Memorial.’