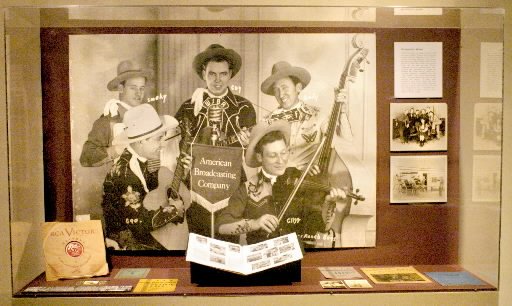 The 101 Ranch Boys are seen in this York County Heritage Trust exhibit. For some time, the York Furniture Center was local sponsor of the nationally known country and western group. Background post: Story on famed 101 Ranch Boys spawns memories

John Contino submitted a photo of the 101 Ranch Boys to pass on to the reporter who wrote a recent Hanover Evening Sun and York Daily Record story on the group.
People really remember the boys.
But the group is more than a memory for Joe Mirasola.
It help launch the career of the York musician and seller of instrument, as Mike Argento reports in a 2006 story.

Joe Mirasola sold his first guitar about 40 years ago.
A guy walked into his camera shop in the first block of West Philadelphia Street in York, wanting to buy a camera. Problem was, he didn’t have the money. But he did have a guitar, a fancy, four-pickup electric guitar of Japanese origin called a Teisco Del Ray. It had a whammy bar, and Mirasola, a musician himself, had always wanted a guitar with a tremolo tailpiece.
He gave the guy $50 for it.
He propped the guitar up in a corner behind the counter of his shop.
The next day, another guy walked in to look at cameras. The guitar caught his eye, and he asked to check it out. He liked it and offered Mirasola $100.
Sold.
Mirasola went upstairs to the apartment he and his wife shared over the shop and told her, “That was the easiest $50 I ever made.”
He related the story to his Bronica camera rep, and the guy said he could hook up Mirasola with guitars. Mirasola put up some pegboard, hung up the guitars and formally entered the music business.
He’d been around music all his life. When he was 8, he appeared on “The 101 Ranch Boys Show” on WOYK radio in York. The band invited people to come down to the studio on Saturdays and sing with the band. Mirasola took them up on it, singing “The Singing Hills.”
He was a hit.
People came to his father’s fruit stand in the City Market to see the kid who sang on the radio. Mirasola thought, “This is great.”
He was hooked.
His father bought him a guitar when he was 13. The guitar’s neck was too big for his hands, and he switched to mandolin. He played for his class in junior high school, which led to a gig as a violinist with the school orchestra. He couldn’t afford a violin, but one of his father’s customers was a music dealer, and he gave Mirasola a violin in return for $2 worth of fruit a week for a year. That violin was 100 years old at the time.
Mirasola worked as a shoeshine boy when he was a kid. (Full disclosure: He worked for a time in my grandfather’s barbershop in the first block of East King Street. Both the shop and my grandfather are no longer with us.)
After he graduated from high school, he went to Newark, N.J., to attend trade school for architecture. His father thought it’d be best for him to learn a trade. But in Newark, he fell into bad company — musicians — and was soon singing with two big dance bands at downtown hotels. He auditioned for another band, the Hotel Pennsylvania house band led by Johnny Long, but lost out to another singer, who got the gig because he was taller. Mirasola heard that singer tell the story one night on “Larry King.” The singer? Vic Damone.
He returned to York after two years in school and met Connie Randisi, and they married. He looked for a job. He could make more money cutting hair than making architectural drawings, so he opted for cutting hair, serving an apprenticeship with Tony Rizzuto. He worked at several shops before striking out on his own in the basement shop in the old Colonial Hotel in downtown York. He later opened a shop at the corner of Sherman and Philadelphia streets, which is where he began selling cameras.
He never did like cutting hair — even though he did for 28 years — and, when he moved his shop to West Philadelphia Street in 1961, he focused on cameras and then musical gear and such. He sold guitars and organs and drums and all sorts of instruments. He gave lessons on just about every instrument there is: guitar, violin, piano, sax, flute, percussion, voice. He’s taught generations of musicians.
He has been there ever since, qualifying his shop and him as a York institution.
Last week, figuratively, he sold his last guitar.
He sold the shop to Sherri Perzinski, whose two kids both took music lessons from Mirasola. The store’s name was changed to Music Center of York.
“This is my mid-life crisis,” she explained. “Men buy sports cars; I bought a music store.”
Mirasola can still be found at the shop most days. He’s helping Perzinski get started and will continue to give lessons “as long as my health holds out,” he said.
But he’s going to slow down.
“I’m 84,” he said. “My wife’s 76. It was time to make a change.”
He takes care of his wife every day. Her health has declined, and she’s suffering from the early stages of Alzheimer’s.
Last week, he said it was a little weird.
“I’d get up, and I didn’t have to go to work,” he said. “I’m not used to that.”