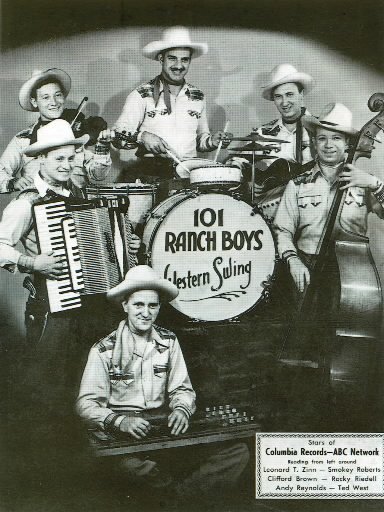 There’s something about the 101 Ranch Boys band that spawns memories.
Steve Goba was one of the boys for a short time in the 1950s.
He saw the York Town Square post Story on famed 101 Ranch Boys spawns memories and contributed information via a comment on the story.
He caught readers up on group members from the 1950s: … .

“Just went on line and punched in the name “Rocky Reidel.” In so doing, I was surprised to see something come up re Rocky. I knew Rock back in the old pre-minister days. This acquaintance was through Roy Albright and Max (Dick) Keller.
I, also, was a member of the 101 Ranch Boys during 1956/1957. The members of the group at that time were Harold Dunn (on Bass), Willy Landis (guitar), Bob Weston (Drums), George Rowe (steel guitar), Steve Goba (accordion), and Andy Reynolds (guitar). George Rowe and I are still alive (I just spoke with George a few weeks ago). I know that Willy died about four years ago. I was told many years ago that Andy was gone. George told me that Harold Dunn passed away quite a few years ago, and neither of us knows the whereabouts of Bob Weston.
“George Rowe and I were with the Ranch Boys during the time of the WNOW-TV stint. It was during the winter of 1956/1957, every Tuesday night at around 9:00 P.M. The sponsor was Purina Feed. The announcer on the show was Jimmy West (he eventually went on to WGN-TV in Chicago as one of the announcers for the Chicago sporting events (CUBS, BLACKHAWKS)). I have a photograph of the group. It was taken in the WNOW-TV studio. The western-motiff background that you mention is the backdrop in this photo.”

WNOW was 1250 on the AM dial, joining WSBA and WORK in York-based radio.
In the 1960s, the station introduced a “town and country” format, which the station described in “Greater York in Action” as “a contemporary version of the older and now largely outdated country and Western format.”
Judging from the number of 101 Ranch Boys fans out there, the country-and-western format lives on.
To share memories of the 101 Ranch Boys, comment below or go to the discussion forum The Exchange.