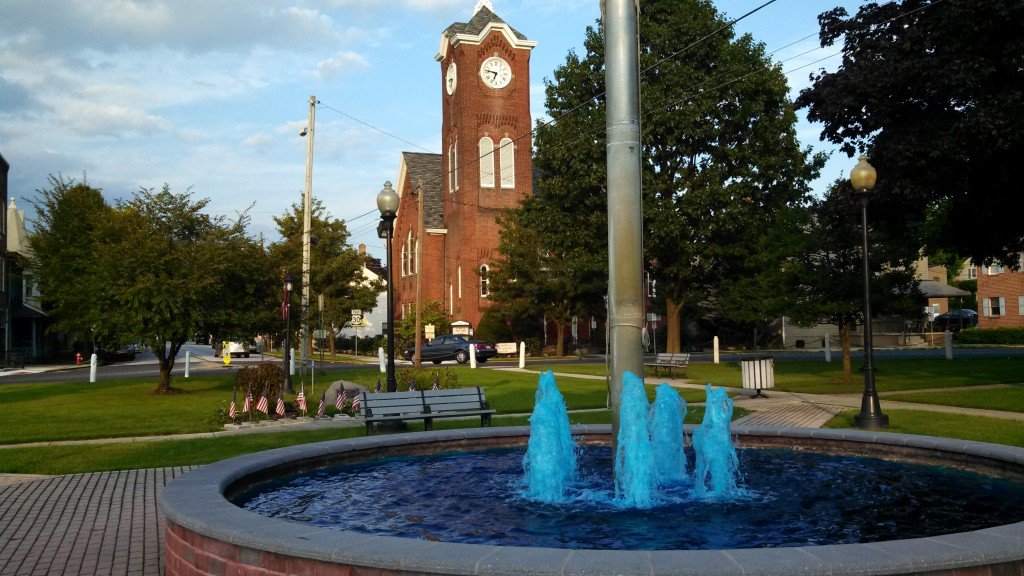 The water in Adams County’s New Oxford’s fountain runs blue, as the camera catches traffic moving through the borough’s square on Pennsylvania’s old Lincoln Highway (now Route 30) from the east. Traffic heading through this square from the east can exit toward Hanover or Carlisle or just keep heading west toward Gettysburg. Also of interest: 1 York/Adams history mystery solved; 1 to go

New Oxford is that beautiful town many York countians pass through to get Gettysburg’s battlefield. Only many don’t just don’t keep rolling through.

They stop to shop for antiques or to sip a cup of Joe.

It’s simply one of York/Adams’ most inviting towns.

So here are 10 points about why Oxford Town, incorporated as New Oxford in 1874, is so likeable:

1. NewOxford.org says this about its town: “Nestled along the eastern edge of Adam’s County  is the quaint town of New Oxford. Rural landscapes, brick sidewalks, tree-lined streets, and stately 18th and 19th century Victorian and Colonial homes adorning the town circle make for an attractive spot in the heart of one of the country’s more historic regions.  The town is built around a beautiful square and surrounded by well cultivated countryside and rolling pasture lands.” That’s about right.

2. New Oxford’s traffic circle is a rarity among York County and eastern Adams County towns. Jefferson and Goldsboro circle traffic around a central park or monument, as does Abbottstown and Gettysburg. But New Oxford’s is far and away the most expansive and attractive. 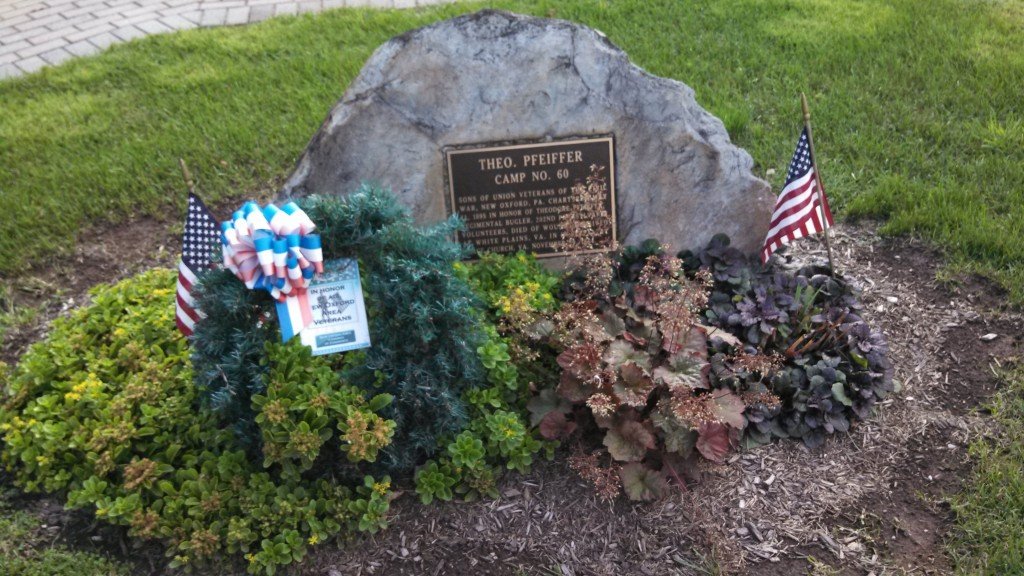 Confederate troops marched through New Oxford before the Battle of Gettysburg. The Civil War is big around the borough, so it’s not surprising to see a monument from that war on the square.

4. It would be interesting to see how often a New Oxford resident who worked in the borough would have to use his or her car. Just around the square, there are restaurants, a hardware store and churches. If you wanted to go on a longer walk, a supermarket on the town’s outskirts beckons. In other words, this is a wonderfully walkable town.

5. The winsome New Oxford Coffee Company, on the square, is the epicenter of the town. It’s also the visitors center and the go-to place for information about New Oxford.

6. Having said that, the barista on duty there recently was unaware of the big story of that week New Oxford: Wild turkeys were strutting around town. When such an event makes news, that speaks well of a town.

7. Antique hunters, as opposed to turkey hunters, provide part of the traffic and pedestrian flow to and around the community. Even Mike, the tall one of the American Picker duo, found an item there in a picking: American Picker goes antiquing in New Oxford.

8. For years, those passing through the western part of the borough were treated to train cars celebrating New Oxford’s rail history. Well, those cars were scrapped a couple of years ago, signaling the end of a landmark, but the train station is intact.

9. New Oxford made the news recently when the nearby York Springs farmhouse and estate of the borough’s Winter Garden Salad Company owners Harry and June Seifert went up for sale. (The estate, which received overflow customers from the famed York Springs resort, did sell for $335,000.)