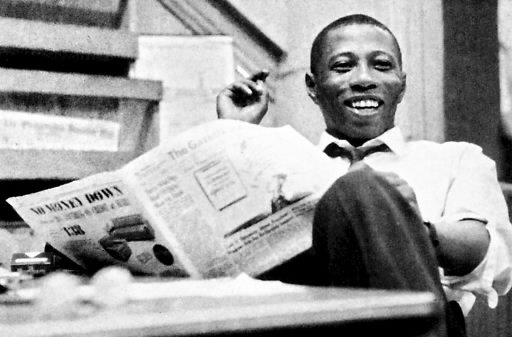 This journalist got his start for the The Gazette and Daily (which he’s holding) under 0wner J.W. Gitt when no other daily newspaper would hire him. He went on to international fame, and a foundation today carries his name with the goal of improving cultural diversity in American journalism. For more, see Question 10 below. Also of interest: A short test of your York black history knowledge and Part I: 10 questions to test your York smarts, 2011 edition.

This is the second installment of the annual holiday tradition of posting questions for family discussions around the Christmas tree.

For York Town Square readers, the answers should come more easily. For more details, follow the links with the answers:

1. What was Valley View Park near Yorkana in Eastern York County known for?

2. Powder post beetles bit into this round, historic structure at Dover Township’s Brookside Park. What was the building’s former use, and why was the park there in the first place?

3. Is Lauxmont, as in the former estate of York Safe & Lock’s Forry Laucks, pronounced  Laucks-mont, after the family name, or Low-mont, with a decided French feel?

4. What was the Brook Leaf Love Nest in eastern York County?

5. Penn Park was York City’s first park. Everyone knows that. But what are the next three oldest city parks?

6. What was the largest population U.S. Census takers ever reported for York City? What is the city’s current population?

7. This family lost two brothers, fighting side by side in Europe, to the same enemy shell in World War I. Can you name that family?

8. York County has produced four known Rhodes Scholars. Can you name them?

9. The York County Academy Charter School opened this year. Does that name bring up any other school from history?

10. This internationally known journalist, now deceased,  got his start at The Gazette and Daily in York in the 1960s. Who was this newsman?

1. Shorty Fincher’s now-defunct park was a music venue, specializing in country-and-western. Roy Rogers and Dale Evans were there. (They brought Trigger.)

And young Elvis Presley appeared on stage in 1956.  “The more he shook, the more they screamed,” one fan recalled.

2. Brookside Park was an trolley park, sometimes called an electric park, because it provided an attraction for riders of trolleys in off-peak hours. York County’s far-flung trolley system was designed to provide transportation for factory and other workers.

The beetles chewed up the former carousel building at Brookside, which joined Cold Springs (Manchester), Highland (West Manchester) and Forest (Hanover) as electric parks in the county.

3. We have an ear-witness whose recollections probably still won’t resolve this debate:  A close relative of S. Forry Laucks, who knew the industrialist, said the official family pronunciation for Lauxmont is “LOW-Mont.”

4. Brook Leaf Love Nest was a tree house that extended over Kreutz Creek. It was a popular place in Hellam Township for honeymooners and was widely publicized in postcards.

5.  After York became a city in 1887, the renovation and building of parks became a popular initiative. So the largely deserted Penn Park was rehabbed in the late 1890s, and the laying out of Farquhar Park came next.

7. The Withers brothers, John Daniel and Harry William, died in 1918.

Their parents, Daniel and Ella, initially were denied a pension due them. But Congressman E.S. Brooks’ influence reversed that decision, and the family received $20 per month, according to an article about the brothers in the 2011 “Journal of York County Heritage.” The brothers reportedly received the largest military funeral up to that point in York County.

8. The names of others might emerge, but for now the Rhodes Scholar count stands at four: Spurgeon Keeny, Bruce McClellan, Eugene Ludwig and Gregory Lippiatt.

9. The York County Academy, founded in 1787, was a forerunner of York College. It was located across from St. John’s Episcopal Church, which originally launched the school.

The site where the academy stood, now a parking lot, is just around the corner from the new charter school.

10. Robert Maynard left The Gazette and Daily in the late 1960s for the Washington Post and later owned and published the Oakland Tribune, the first black-owned major metropolitan daily.

“The country’s biggest achievements came about because somebody believed in something, whether it was a steam engine, an airplane or a space shuttle,” he said. “Only when we lose hope in great possibilities are we really doomed. Reversals and tough times inspire some people to work harder for what they believe in.”

Dori Maynard, his daughter and a former York resident, serves as the president of the Maynard Institute, which promotes those themes.