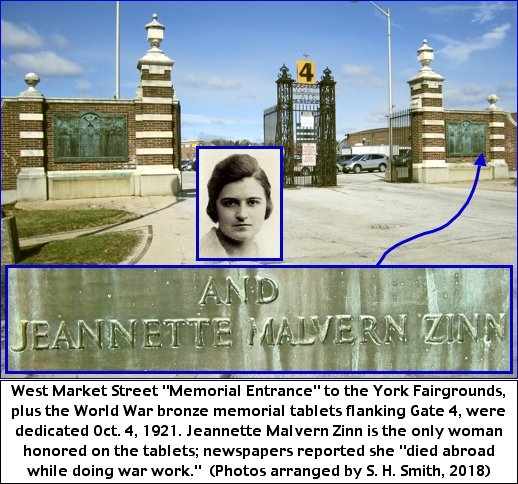 Jeannette Zinn is the only woman honored on the World War I memorial tablets that flank the West Market Street entrance to the York Fairgrounds. These tablets were dedicated October 4, 1921; to memorialize those in York County who “gave their lives in defense of liberty, right and justice.”

Last week I wrote Jeannette Zinn’s name is displayed on both of the two major, all-inclusive, WWI memorials dedicated in York County following WWI. I’ve received numerous queries as to the location of the second memorial. When I respond with “flanking the West Market Street gate into the fairgrounds,” most do not recall seeing those memorial tablets; likely because the tablets are covered with nearly 100-years of grime.

It took several visits, for the lighting to be just right, to obtain acceptable photos of the list of names. Click on this LINK for a yorkblog.com Full View of the photo in this post if details are cut off in cropping, or if it has been removed from the ydr.com site.

I got a surprise when I compared the names on the Fairgrounds WWI tablets to the 197 names on the four WWI panels fronting the columns of the former York County Court House; now the York County Administration Center at 28 East Market Street in York, PA.

There are SEVEN names on the Fairground WWI tablets in addition to the 197 that appear on the Court House WWI panels. Those names are:

Five of these SEVEN veterans appear the book “York County and the World War 1914-1919” by Clifford J. Hall and John P. Lehn. They are in the section devoted to the York County patriots who gave their lives in national service during the World War. Future posts will tell the stories of the SEVEN.