The story of Zech’s Bakery in Yoe 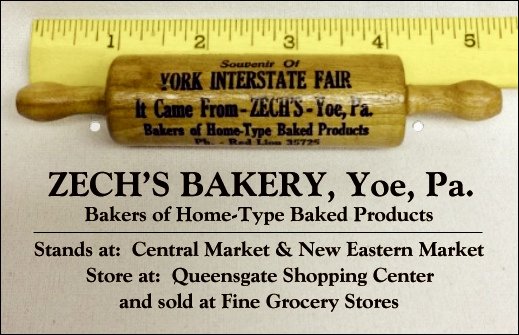 Nancy wrote, “All of Zech’s goodies were incredible. Is Zech’s still in business? If it is, I’ll certainly plan a return visit to York, just to partake of goodies at Zech’s Bakery. Except for the goodies, I don’t remember much about Zech’s. Can you furnish the story of Zech’s Bakery?”

A short story of Zech’s Bakery is provided via research in old newspapers and on Ancestry.com.

Zech’s Bakery was located at the rear of 72 North Main Street in Yoe, Pa. The bakery operated at that location from 1946 into 1970. Their bakery products were sold at Central Market in York (the Zech’s stand was near the Beaver Street entrance), at New Eastern Market on Memory Lane in Springettsbury Township, and at their store in the Queensgate Shopping Center. It was noted they also sold their bakery products at “Fine Grocery Stores;” however I did not discover specifically which stores. Also, per the Zech’s Bakery souvenir of the York Fair, they most likely maintained a stand at the fair.

George E. Zech established Zech’s Bakery in 1946, when he was 45-years old. George had prior experience, working in various capacities, for several bakeries in York. Elsie E. DeHoff married George E. Zech on June 11, 1936 at Trinity Lutheran Church in York. The newspaper article reporting their wedding, noted their occupations at that time.

“Mr. Zech is employed as bookkeeper at Minnich’s bakery. He is president of the York Civic Opera Company, and is soloist of Trinity Lutheran Church choir. Mrs. Zech is employed at the Bon-Ton Department store. She is organist and choirmaster at Trinity Church.”

In 1950, George Zech entered a national contest among professional bakers; his pie recipe won. Zech’s slogan was “Bakers of Home-Type Baked Products.” In 1965, Zech’s Bakery had 28 full-time employees. Zech’s was often in the news for donating their bakery products to various charitable functions. At the age of 69, George retired and all his bakery equipment was sold at public sale on November 16, 1970. George E. Zech died a little over a year later, on January 2, 1972 and is buried in Dallastown Union Cemetery.

I asked Nancy Wilt to put together a list of her Top Ten favorite Zech’s bakery products. That will be the subject of a future post. If any of my readers wish to provide their lists, those might make for neat comparisons.