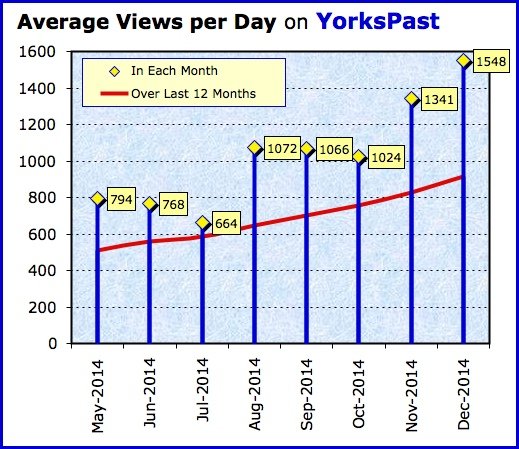 YorksPast readership growth continues, thanks to all my new and loyal readers! As a whole, interest in York County Mills edged out the Susquehanna Trail as the most popular topic. Thanks to Cliff Satterthwaite for generously providing the artwork for many of the mill posts.

At the beginning of every month, I’m sharing with my readers the top 10 posts from the previous month. These are your favorites during December 2014:

In wrapping-up the 19-part-series on the Susquehanna Trail, this post answers a question posed by several readers. “When driving from Harrisburg to the Maryland Line, what roads need to be taken today to retrace the route of the original Susquehanna Trail?”

Cliff Satterthwaite drew several small parts within Reynolds Mill while painting many views of it in 1966. I asked readers to help identify these mystery parts.

I share with my readers the top 10 posts from the previous month. These were your favorites during November 2014.

The Stonybrook Mill was unique; the massive 32-foot diameter overshot water wheel was inside the brick mill building. The artwork of the water wheel and interior was done by Cliff Satterthwaite during 1966, the same year that I had a chance to explore the inside of this mill. The research of Grant Voaden is used to provide background.

Several readers requested a map locating the four mills in Stony Brook; specifically in relationship to the surroundings of today. I thought the best way to honor the request is a 2014 Bing.com Aerial Photo, where I’ve noted the location of each of the four mills.

During 1899, the Hanover Match Company is the largest factory employer in Hanover and 13th largest overall in York County. In 1889, Martin Moul started making matches in Hanover; however production really took off in 1892, with major investments from P. H. Glatfelter, along with his new son-in-law Charles E. Moul.

High Jinks on the Susquehanna Trail

The Susquehanna Trail quickly became a favorite route of motoring tourists. Motels along the trail quickly began to see the benefit of being located on the trail. This produced road marker shenanigans; i.e. the appearance of fake Susquehanna Trail road markers to direct the flow of traffic by motels or through towns, close to, but not on the Trail.

The Rev. Walter E. Garrett, Pastor of the Kreutz Creek Charge of the Reformed Church in York County, visited the Stonybrook Mill building in the early 1930s and recorded the names and dates written on the walls and posts. This post focuses on those names on the walls, along with some neat 1966 interior artwork, generously provided by Cliff Satterthwaite.