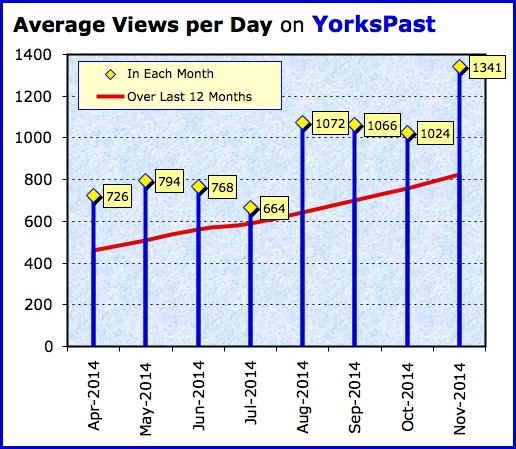 YorksPast readership continues to grow, thanks to all my new and loyal readers! The Susquehanna Trail continues to be a very popular topic; after two more Friday posts, it will end as a successful 19 part series. November also saw increased readership of my novel, Railcar Gold, that appears every Thursday; this is the first time more than one installment appears in the same top 10 list.

At the beginning of every month, I’m sharing with my readers the top 10 posts from the previous month. These are your favorites during November 2014:

The completion of Susquehanna Trail, during July of 1924, was met with a promotional blitz by the Publicity Bureau of the Williamsport Chamber of Commerce. See what the Brooklyn Daily Eagle had to say about the Trail.

The artwork of Cliff Satterthwaite was displayed within an exhibit at the Colonial Court House. I was impressed with his Stonybrook Mill painting, it definitely captured the essence, the working guts of a mill. Cliff Satterthwaite shared with me 1966 pleinair pencil and paper drawings of that wooden water wheel powered grist mill, that I explored in my youth.

Agitating for a Susquehanna Trail Celebration

As the Susquehanna Trail neared completion in 1924, ideas were put forth for a grand celebration. The Williamsport Chamber of Commerce took charge of making the necessary plans and arrangements. If so, who is doing the agitating?

With the approach of Halloween in 1920, a masked carnival was part of the completion jubilee for the Susquehanna Trail in Shrewsbury. The concrete roadbed had been recently constructed through Shrewsbury, as far south as Turnpike.

What Happened to the Old Church Records of Freysville?

Two years ago, I decided to use YorksPast to force me to finally start my novel, centered upon York’s railcar builders Billmeyer & Small. I’m on a weekly schedule of researching and writing an installment of the novel that appears every Thursday in YorksPast. In this post, I use my historical research on European travel as George and Emma Billmeyer begin their journey through Europe in 1884.

York is In Danger of Losing the Susquehanna Trail during 1923

In 1923, the terrible condition of the Harrisburg-York road was called to the attention of Pennsylvania Highway Commissioner Wright as argument for the designation officially of the Harrisburg-Gettysburg-Washington route as the Susquehanna Trail.

Susquehanna Trail posts dominated the most popular YorksPast posts during October. At the beginning of every month, I’m sharing with my readers the top 10 posts from the previous month. These were your favorites during October 2014.

I’ve received a lot of compliments about the marriage proposal within this post. This also marks the first time more than one installment of my novel appears in the same top 10 list.

Remembering TWO Thanksgivings in one Year

In 1940, Pennsylvania was one of the 16 States that maintained tradition and kept Thanksgiving the last Thursday in November. The Federal Government, and all states bordering Pennsylvania, celebrated Thanksgiving a week earlier.