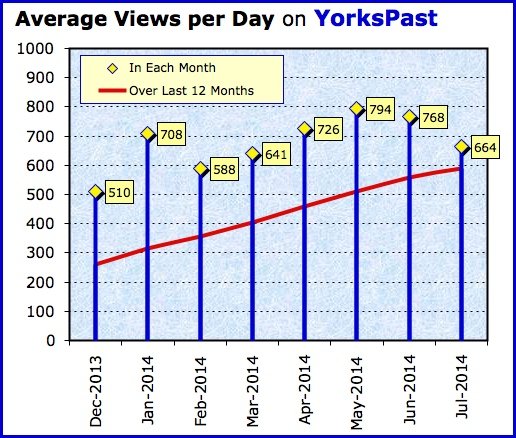 YorksPast started with a post on July 26, 2012.  A few days ago, on July 26, 2014, I began the third year of sharing a hodgepodge of explorations of York’s Past.  The posts totaled 472 during those first two years; averaging slightly more than four and one-half posts per week.

This chart shows the growth of YorksPast readership in recent months; thanks to my ever-growing legion of loyal readers!  At the beginning of every month, I’m sharing with my readers the top 10 posts from the previous month.  You’re continuing to catch up on reading the past installments of my historical novel, that I post every Thursday; 25 of the top 50 post views were installments of Railcar Gold.  These are your favorites during July 2014:

In 1856, a tiny 0.08-acre lot was set-aside at a “T” intersection for a school building.  This lot was distinctively in the middle of a farm lane, on the boundary between John Miller’s and John Stricker’s farms.  About 1860, Miller’s One-Room Schoolhouse was built on that lot.  Today that building still stands as a private home at 3565 Heindel Road in Springettsbury Township, York County, PA.

A Retrospective of the Confederate Invasion of 1863

This retrospective of YorksPast posts related to the Confederate Invasion of 1863, into York County, Pennsylvania, is for the “Sesquicentennial Plus One” commemoration.

In early July, I shared this top 10 list; i.e. the posts with the most page views from my loyal readers, during June 2014.

Celestino, Costello & Company is the eleventh cigar related manufacturer that I’ve written about thus far, in counting down the top 50 employers in York County during 1899.  This was one of the many cigar related businesses attributed to Edwin Myers, who made extensive modifications to a farmhouse in Springettsbury Township in 1901, creating the Meadowbrook Mansion in the Georgian Revival style.

Witmer’s One-Room Schoolhouse was built in 1889; prior to the 1891 formation of Springettsbury Township from Spring Garden Township.  Township farmer and Mennonite Preacher David Witmer deeded the land for Witmer’s Schoolhouse to the Spring Garden School District for One Dollar.  Offering land for schoolhouses for only one dollar, nearly always resulted in the schoolhouse being named after the benefactor.

Memories of Miller’s One-Room Schoolhouse and the Surrounding Area

Mrs. Erma Throne Daron had a very long teaching career, which included many years at Miller’s.  Turk Pierce provided memories of Miller’s One-Room Schoolhouse and the surrounding area in the mid-1940s.