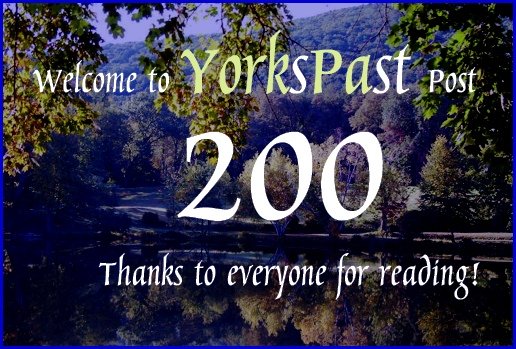 I’d like to thank everyone for reading and providing feedback to YorksPast.  I’ve decided to take this occasion to share with my readers YorksPast’s ten most viewed posts.

Eliot Ness, a former prohibition agent, of The Untouchables fame, had a significant hand in the demise of the York Safe & Lock Company.

What will be the Fate of the Cow Weathervane?

With regards to the demolition of the former Avalong Farms Dairy barn, I ask, what will be the fate of the cow weathervane?

Johnson Controls leaving the Grantley Plant may be only partially correct

In this January 2013 post, it was my guess that the Navy Systems workforce will likely remain at the Grantley Plant after test facilities, engineering and support personnel are relocated.

A sudden interest in Violet Hill from several directions had me move a future posts folder to the top of the pile; this was the first in a series of four posts.

The Stony Brook Slate & Brick Company constructed a narrow gauge railway along Stonewood Road in 1905; this was the first in a series of three posts.

A New Car by an Old Designer, the KLINE KAR; Pullman Pedigree to Racing Success, Part 3

The third part of a series about Kline Kars, designed by Jimmy Kline, at the start-up B.C.K. Motor Company in York, PA; and their use of racing to popularize the cars.

The quarry, plant and town of Billmeyer, Conoy Township, Lancaster County were the result of a business partnership of George S. Billmeyer and his brother-in-law John E. Baker.

Are these Three Schools in or near Potato Town, North Codorus Township?

I used various historic maps to determine the location of the Potato Town schoolhouse and determined that it was used as a school anytime between 1834 and 1875.