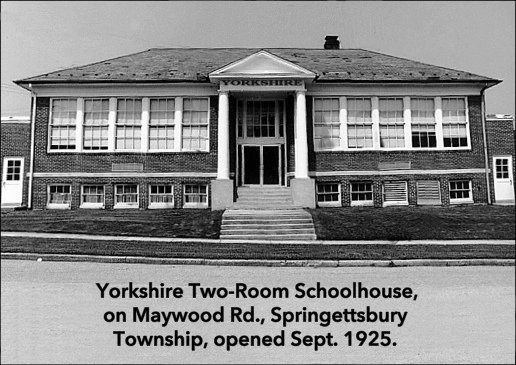 The Yorkshire Two-Room Schoolhouse, of the Springettsbury Independent School District, opened September 8, 1925. It faced Maywood Road, at the northwest corner with 5th Avenue; and was financed by Mahlon Haines. The schoolhouse had modern conveniences and featured a finished basement that could be used as a playroom, or for community events. (Late 1950s photo from Archives of Springettsbury Township Historic Preservation Committee)
Posted by Stephen H. SmithSeptember 22, 2021December 15, 2021 All Posts, Buildings, Maps, One-Room Schools, Pennsylvania, Roads, Schools, Springettsbury Township, Talks, York County2 Comments

During the Yorkshire History Walk on September 18th, I had requests for copies of my talks. In the coming days, my presentations, at each stop, will be posted as a series of YorksPast articles. This post focuses on Stop 9, at the intersection of Maywood Road and 5th Avenue; highlighting history of the Yorkshire Schoolhouse and the initial Springetts Fire Hall.

In order to stick to an overall 90-minute History Walk, with about 5-minutes walks between the 9-stops, my presentations were edited to stick to that overall time schedule. The posts will include Bonus History; i.e. the full text that I started with at each stop, prior to the edit; plus a few corrections and many additions.

Instead of posting the stops in order, I’m posting the stops where a correction is required or where I received the most additions. Thanks to everybody that set the record straight during the walk and to everybody that shared Yorkshire stories as we walked between stops. I’ll also be sharing photos submitted by those who made this walk so enjoyable.

Stop 9 on the Yorkshire History Walk map was selected because that location connects with stories and history of the Yorkshire Two-Room Schoolhouse; plus the tale of the initial Springetts Fire Hall. For at that intersection, the school was to have been joined by a church, a store and a fire hall; occupying the four corners of Maywood Road at 5th Avenue.

The Yorkshire Two-Room Schoolhouse, of the Springettsbury Independent School District, opened September 8, 1925. It faced Maywood Road, at the northwest corner with 5th Avenue; and was financed by Mahlon Haines. The schoolhouse had modern conveniences and featured a finished basement that could be used as a playroom, or for an occasional community event.

The schoolhouse was leased at $1 per year to the Springettsbury Independent School Board. That lease lasted until 1947, when the school board started to contemplate additions, and at that time purchased the building and playground from Mahlon Haines.

During the first 4-years of use, the small number of students in the area could only justify one teacher. From 1925 to 1929 only one of the classrooms was utilized; in which Mrs. Daisy I. Foster taught all eight grades in one room.

Starting in the 1929-30 school year, both classrooms were utilized with separate teachers, for grades 1 to 4 in one room, and grades 5 to 8 in the other room. Although for two years in the early 1930s, the school budget was such that the Springettsbury Independent School Board returned to one teacher, one room, for all eight grades at Yorkshire.

From the 1937-38 through the 1946-47 school years, the two Yorkshire classrooms were grouped by grades 1 through 3, and grades 4 through 6. After which students from the Yorkshire area attended grades 7 and 8 at Hiestand’s Schoolhouse; located one mile to the west; in the Olde East York development.

A 1947-1948 school year directory indicates Mrs. Anna Z. Kondor taught grades 1 and 2 in one of the classrooms, and Mrs. Ada M. Krebs taught grades 3, 4 and 5 in the other classroom of the Yorkshire Schoolhouse. After which students from the Yorkshire area attended grades 6, 7 and 8 at Hiestand’s Schoolhouse in the Springettsbury Independent School District.

The following photo is a late 1947 southeast looking aerial photo of the 5th Avenue area of Yorkshire. The upper right insert is an October 20, 1947 high altitude aerial photo; used to date the previously undated J. David Allen aerial photo. The photo was recently discovered in the Archives of the Springettsbury Township Historic Preservation Committee. This handout photo was used to illustrate Stops 6, 7 and 9 during the Yorkshire History Walk; and will also be utilized when I write about Stops 6 and 7.

In the lower right, on the aerial photo side of the handout, is how Yorkshire School appeared in 1947, when the playground was located east of the school. Land for a baseball field and playground, located north of the school was later provided by the developer, so the west side of Maywood Road could be developed into building lots; per the original development plan for Yorkshire.

Population was increasing rapidly in the Yorkshire area. Starting during the 1948-1949, and through the 1951-1952, school year, the two classrooms in Yorkshire Schoolhouse could only accommodate children through the fourth grade; with grades 5, 6, 7 and 8 attending Hiestand’s Schoolhouse.

In 1952 the first of several additions was made to the original 1925 Yorkshire Two-Room Schoolhouse. That year, four classrooms were added to the west side of the schoolhouse, allowing grades 1 through 6 to be taught at Yorkshire. Plus with the emergence of an agreement, between the Springettsbury Independent and Spring Garden Township School Boards, which a year later resulted in the formation of the joint York Suburban School System, students from Yorkshire, in grades 7 and 8 were taught at Mt. Rose Jr. High School.

Vision of a Yorkshire Community Square

Mahlon Haines planned to establish a Yorkshire Community Square at the intersection of Fifth Avenue and Maywood Road. His vision was to have those four corners occupied by a school, a church, a store and a fire hall; combining a firehouse and community room.

The Yorkshire Schoolhouse was built, in 1925 as planned, on the northwest corner of Fifth Avenue and Maywood Road. The lot on the southwest corner was offered to an Evangelical church, however that congregation decided to locate along the more heavily traveled Longstown Road. In 1926, the church was built on a lot within Yorkshire, at the southwest corner of First Avenue and Edgewood Road; i.e. where Longstown Road merges with Edgewood Road. That story is shared at Stop 4.

Not dissuaded, Mahlon Haines continued to pursue his vision of a Yorkshire Community Square. In December of 1927, Haines offered the Springetts Fire Company the lot catty-corner from the school for a fire hall; i.e. the lot on the southeast corner of Fifth Avenue and Maywood Road.

Springetts Fire Company, No. 1, had formed January 23, 1926, when a group of persons gathered at the Yorkshire Schoolhouse to formulate plans to guarantee homeowners some kind of fire protection. During that meeting a volunteer fire company was organized. Months later, when their initial fire fighting equipment was acquired, it was housed in a local garage.

The volunteer fire company held events in the Yorkshire Schoolhouse and Firemen’s Festivals on neighboring lots to raise funds for their fire fighting equipment. Mahlon Haines also staged events for the benefit of Springetts Fire Company; such as several rodeos in late 1926, at the early Haines Park, located near the Yorkshire Schoolhouse. Besides typical rodeos at that location, an added attraction was the Haines Zoo; featuring buffalo, wildcats, fox, and deer.

Following Mahlon Haines’ offer to donate the lot catty-corner from the school for a fire hall, he seems to increase his fund raising assistance to the fire company. There were a host of events, at the Haines Race Track, after it opens in June of 1928, which were staged for the benefit of Springetts Fire Company’s New Home. The following Labor Day events at Haines Park in 1929 is typical:

However in 1931, per that history of the Springetts Fire Company, “the governing body of the now prosperous Fire Company decided that the location of the proposed fire hall should be on the main thoroughfare, i.e., U.S. Route 30, which is now Pennsylvania Route 462. Consequently, the plot of ground donated by Mr. Haines was offered as part payment for a larger plot of ground on the southern side of the highway at the western end of Yorkshire. The advantages of this location were very apparent because the fire hall would be nearer to the rapidly growing East York community, an area of Springettsbury Township also in need of fire protection.”

“In July 1931 the Springetts Fire Company building was completed at a cost of $10,000.00. Mr. Haines was the financial benefactor and advisor to the construction.” That location served as a fire hall from 1931 until 1958; and the building still stands at 2914 East Market Street.

In October of 1958, after a new fire station was built on the northeast corner of Mills and Market Streets the original fire hall was sold. For roughly 27 years, the 1931 Firehouse, at 2914 East Market Street, had been used as a fire station. Raymond L. Wilhide was the next owner, he initially operated a Used Car Lot on the premises; however by 1960, Ray and his wife Helen turned the old fire station into, what else, the Fire House Tavern. Ray and Helen Wilhide operated the Fire House Tavern until about 1977.

About 1978, ownership of 2914 East Market Street passed to David and Betty Moul. They changed the name of the tavern to the Woozy Moose. The Woozy Moose Tavern operated for approximately four years.