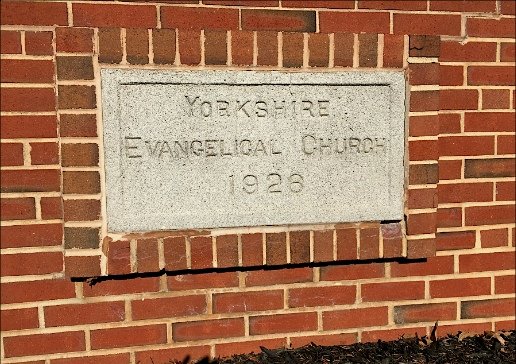 At stop number 4 of a Yorkshire History Walk, the story of the first church in Yorkshire was shared. The present Yorkshire United Methodist Church congregation recognizes their first Yorkshire church site, via displaying the 1926 cornerstone of the Yorkshire Evangelical Church.

During the Yorkshire History Walk on September 18th, I had requests for copies of my talks. This series of posts includes the script at each stop, with Bonus History; i.e. the full text that I started with at each stop, prior to the edit to keep to an overall 90-minute schedule.

Stop 4 was located along First Avenue, at the southwest corner with Edgewood Road, as revealed per the Yorkshire History Walk map. This was the location of the first church built in Yorkshire. A residence now stands at that location.

When Mahlon Haines purchased several adjoining properties, during the Fall of 1924, to establish his 318-acre Yorkshire Ranch, all the unsold lots in the Yorkshire development were part of the sale. Haines had a vision of a Yorkshire Community Square; to be located in terms of present streets, at the crossroads of Fifth Avenue and Maywood Road. The Yorkshire Schoolhouse was built, in 1925 as planned, on the northwest corner.

The lot on the southwest corner of Fifth Avenue and Maywood Road was offered to a growing Evangelical Church located near Stony Brook. That congregation did decide to locate in Yorkshire, however preferred a site along the more heavily traveled Longstown Road, at where it merges with Edgewood Road.

The following shows Mahlon N. Haines’ September 15, 1925 receipt in full payment for lots 86 and 87 in the Yorkshire Development. J. M. Price and Harry Hoke made the payment in behalf of the Stony Brook Evangelical Congregation. The combined lots have a footage of 99 x 125. Doris L. Emenheiser wrote, “Mr. Haines, a prominent York area shoe merchant, reportedly said he didn’t want a shack built on these lots.”

Mahlon Haines was undoubtedly referring to something like the wooden structure then utilized by the Stony Brook Evangelical Church. That is considered the initial church building of the present Yorkshire United Methodist Church congregation. The Stony Brook Evangelical Church was built in 1879 and was vacated in October of 1926. It was located along the east side of Stone Ridge Road; and per present roads: near the southeast corner with Eastern Boulevard. It was located across Stone Ridge Road from a Burial Ground, located on the Hoke farm in Springettsbury Township during 1932.

The following side-by-side aerial views, during 1957 and 2021, show the locations of the second and the third church buildings for the present Yorkshire United Methodist Church congregation. When the 1926 First Avenue church was built, within the Yorkshire development, Longstown Road was the State Maintained Road to Longstown. When the present 1958 church, at 125 Edgewood Road, was built on the eastern side of Longstown Road, the State Maintained Road to Longstown had shifted to Edgewood Road.

Following the September 15, 1925, purchase of the lots, the Building Committee of the congregation planned their new church building. Harry Hoke, the secretary of the Committee, also was in charge of the excavation of the basement, by church members. Harry Boyer superintended the building of the church. The cornerstone for the First Avenue Church was laid on June 27, 1926.

C. A. Boyer and Sons were the builders of the First Avenue Church; their business was located at 153 South Albemarle Street in York. The $9,839 cost of the construction, was kept low because much of the labor was donated by the members of the church. The dedication of the church was held on October 10, 1926.

In the mid-1950s, the congregation size had increased such that a larger lot was sought to construct a new church sanctuary; whereupon the First Avenue building would serve as a dedicated Sunday School site. In March of 1955, a 300-feet by 200-feet property was deeded to the church from the Estate of Annie E. Throne. That site was along Longstown Road, just east of the First Avenue Church.

J. Alfred Hamme served as the architect for the present sanctuary of the Yorkshire United Methodist Church congregation. The groundbreaking ceremonies were conducted on September 9, 1956. The following photo shows the construction progress, as of August, 1957.

In 1969, an Educational Wing was added to the southeast end of the new sanctuary at 125 Edgewood Road. After which the First Avenue Church lot was sold, whereupon the building was demolished and a residence was constructed on the double lot.

THIS POST Stop 4— The story of the first church in Yorkshire.