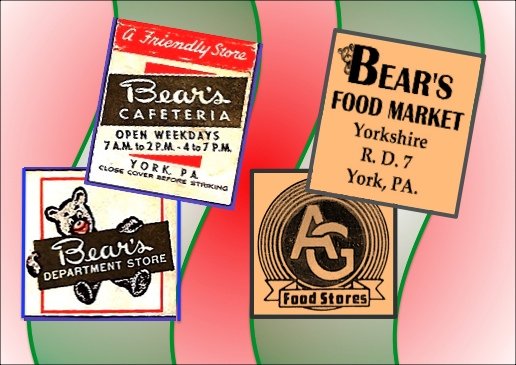 During the walk between stops 3 and 4 of a Yorkshire History Walk, tales were shared about Bear’s Food Market and the various restaurants occupying that grocery store in later years. That store, on the Lincoln Highway, near the east entrance to Yorkshire, has a connection to Bear’s Department Store/Cafeteria, on the Square in Downtown York.

During the Yorkshire History Walk on September 18th, I had requests for copies of my talks. This series of posts includes the script at each stop, with Bonus History; i.e. the full text that I started with at each stop, prior to the edit to keep to an overall 90-minute schedule. The stories of Bear’s Food Market are additional Bonus History; which was new to me. I’ll share those details and add a little of my own research.

Stop 3—The mystery of the missing section of Greystone Road.

Stop 3 was located along Eastern Boulevard, as revealed per the Yorkshire History Walk map. The mystery of Greystone Road involves that road segment between Eastern Boulevard and First Avenue; it was originally planned but never built. It was a reader of my Blog who raised the question; it looks like a road was meant to pass through here, why didn’t it get built?

The earliest 1924 plan of Yorkshire has been flipped in the following view, so that North points upward. The missing section of Greystone Road is within the area boxed in yellow.

The initial developers of Yorkshire, laid out lots which were much smaller than what the public wanted. For example the “yellow” section, bounded by Eastern Boulevard to the north, Edgewood Road to the east, First Avenue to the south and Lyndhurst Road to the west, was designed to have 22 building lots, which included 5 lots fronting Greystone Road passing through it. Instead his section contains bigger lots for only 11 houses; which is one-half the planned lots.

As we waited for the group to gather at Stop 3, someone raised a trivia question with me: “Do you know where the first one-way streets were located in Springettsbury Township?” I had no idea, so he gave a short answer: “In Yorkshire, of course.” He provided additional details by noting the northern sections of Edgewood Road and Longstown Road were made one-way in the mid-1950s.

In checked for additional details, I discovered in the mid-1950’s the State wanted to improve the road to Longstown. The State did not like the kink in the-then State-maintained Longstown Road; i.e. the kink where Stone Ridge Road branches off to the east. Longstown Road did have an advantage, because it already aligned with Mt. Zion Road, to the north side of East Market Street. However to avoid the Longstown Road kink, the State abandoned the northern section of Longstown Road and adopted Edgewood Road; running through the Yorkshire development.

During the walk between stops 3 and 4, tales were shared about Bear’s Food Market and the various restaurants occupying that grocery store in later years. That store, on the Lincoln Highway, near the east entrance to Yorkshire, was claimed to have a connection to Bear’s Department Store/Cafeteria, on the Square in Downtown York. I point out Bear’s Market on the 1957 aerial photo; its address was 3312 East Market Street. In terms of present landmarks, it was located slightly to the west of the Jiffy Lube; centered on driveway shared with the Rite Aid.

One of the earliest newspaper articles I discovered about Bear’s Food Market appeared in The York Dispatch of August 15, 1946. Quoting the opening and closing paragraphs: “Burglars who looted the Bear Food Market, on the south side of the Lincoln Highway, at the eastern approach to Yorkshire, early this morning, after rifling a desk, lost their prize, an 800-pound safe.”

“A passing motorist found the safe in the middle of the Lincoln Highway, east of the Mt. Zion Road intersection, at 1:30 o’clock. It is believed that it fell from the vehicle, which was carrying it away from the scene of the crime. The motorist notified State Police at the York substation, who removed it to their barracks. The safe was returned to Charles H. Bear, III, proprietor of the store, this morning, by the State Police.”

I was told Bear’s Food Market opened immediately following WWII and was very popular with Yorkshire residences until larger food stores opened in the York County Shopping Center in the mid-1950s. Bear’s Market also exclusively carried popular baked goods from Bear’s Cafeteria in Downtown York. The announcement of the opening of the store appeared in The Gazette and Daily of July 12, 1946, within a full page ad for The Yorktowne Service Stores: “Announcing a new member: Bear’s Food Market, Yorkshire, R. D. 7, York, PA.”

The Yorktowne Service Stores had begun in 1928 as a 50-store organization to advertise and buy grocery merchandise cooperatively. By 1947, the organization consisted of 315 individually owned retail grocery stores; all over York County, with some in Adams County, Cumberland County and northern Maryland. In 1947 a legal name change was made to the: Associated Grocers of Central Pennsylvania, and the entire group was known as the A-G Food Stores.

Deed research shows on October 15, 1945, Charles H. Bear III and his wife Miriam purchased the lot where Bear’s Food Market was built, it contained 200-foot frontage on the Lincoln Highway and consisted of 9.8-acres, with fields extending to the southeast, all the way to Stone Ridge Road.

The gentleman sharing the tale of Bear’s Food Market, noted there was always disagreement between his parents on how the three Charles H. Bear individuals were related, and how that explained their involvement in Bear’s Department Store and Bear’s Food Market. He thought that would be a good project for me to research; to set the record straight.

Starting with the family of Henry Stover Bear [1825-1886]; with his wife Elizabeth Lichtenberger [1831-1874], they had 12-children. Their three children associated with the business (Bear’s Department Store) are: Stephen, Charles and Jennie.

After the death of Charles H. Bear, Jr. in 1949, his Will directs Bear’s Department Store business to be carried on by an advisory committee consisting of: his widow Anna Blair Bear, his sister Nora Bear Deardorff, and his attorney McClean Stock. The Will further directed the first vacancy on the advisory committee will be filled with his daughter Charlotte Bear Stock and subsequent vacancies to be filled by the committee members.

In 1970, Bear’s Department Store was sold to Zollinger’s of Allentown, however ongoing financial problems caused the store on the Square in York to close permanently as of July 4, 1977.

Even though Charles H. Bear III is the son of the founder of Bear’s Department Store, he rises no higher than the position of Buyer within the company through the early 1940s. Thereafter, first going into business on his own as a grocery store proprietor, then as a real estate investor, and finally as a salesman for the Flinchbaugh Company.

What began as Bear’s Food Market in 1946, resulted in a 14-year Food Market existence; followed by 15-years of restaurants in the building.

The first restaurant in the former Bear’s Food Market building was The Menu-Ette; here photographed during the Christmas season of 1963. The artwork covering the windows is by Cliff Satterthwaite.