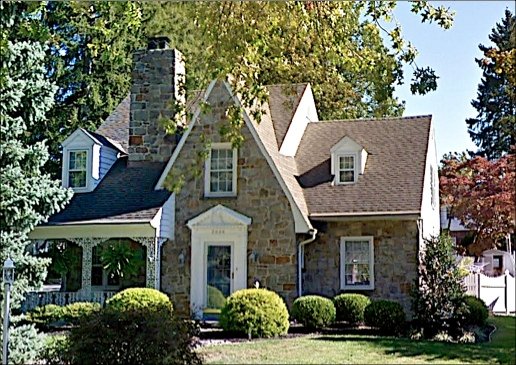 Mahlon Haines had this house built as a wedding gift; prior to the April 28, 1937 marriage of his son Stanley E. Haines to Mary Elizabeth Nevin. The house is in Yorkshire, on the southwest corner of Eastern Blvd. and Pinehurst Rd. Shown is the 3026 Eastern Blvd. side of the house. (Google StreetView)
Posted by Stephen H. SmithOctober 30, 2021December 15, 2021 All Posts, Buildings, Businesses, Pennsylvania, Springettsbury Township, Talks, York County2 Comments

During the walk between stops 1 and 2 of a Yorkshire History Walk, two individuals shared stories of early Yorkshire resident Stanley Haines. The first one pointing out the house that Mahlon Haines built as a wedding gift when his son married, and the second was the tale of Stanley being a Second World War Prisoner of War.

During the Yorkshire History Walk on September 18th, I had requests for copies of my talks. This series of posts includes the script at each stop, with Bonus History; i.e. the full text that I started with at each stop, prior to the edit to keep to an overall 90-minute schedule. The story of Stanley Haines is additional Bonus History; which was new to me. I’ll share those details and add a little of my own research.

Stop 2 was located along Eastern Boulevard, where it intersects Wynwood Road. Per the Yorkshire History Walk map, this stop location was selected, due to its close proximity to the site of the Yorkshire Trolley stop. We know where that trolley stop was located, because it is indicated on the earliest plan of Yorkshire.

In 1924, when Yorkshire was initially developed, York County’s electric trolley streetcar system consisted of 85 miles of track with nearly 11-million passenger trips per year. The Yorkshire Trolley stop along the York to Wrightsville line was located on the south side of Market Street, mid-way between Lyndhurst and Pinehurst Roads.

Trolley service in and near the City of York existed from August 18, 1892 until February 4, 1939. However trolley service extended to Wrightsville for a shorter time span, from May 21, 1904 until February 1, 1933. That trolley track generally ran adjacent to the south side of the Lincoln Highway between East York and Wrightsville. There are early 1930s photos of trolley cars at Stony Brook. In asking if anybody had photos of a trolley car at the Yorkshire stop, one person thought they might; however that search did not pan out.

Newspaper accounts confirm that is indeed a house built just prior to the April 28, 1937 marriage of Mahlon’s son Stanley E. Haines to Mary Elizabeth Nevin. They were planning to move into it immediately after their honeymoon trip to Florida and Cuba.

The following September 15, 1937, aerial photo of northwest section of the Yorkshire Development is used to highlighted locations of the Yorkshire Trolley Stop, which existed from 1924 until 1933, and the 1937 house constructed by Mahlon Haines as a wedding gift for Mr. and Mrs. Stanley E. Haines.

After the gentleman shared the location of Stanley Haines’ house, a woman mentioned her mother often told about the day Mary Haines got the telegram during the war; informing her husband was Missing In Action. She indicated that Stanley and Mary Haines were well liked and the whole Yorkshire community was shocked and saddened by the news. Later Mary was notified Stanley was captured. Stanley Haines was a Prisoner of War and Purple Heart recipient. Upon returning home, Stanley was never the same; and probably had what we know today as Post Traumatic Stress Disorder.

Stanley Emerson Haines was born in York during 1910, when Mr. & Mrs. Mahlon Haines lived at 334 West Market Street. He was their first child. Early schooling was in York before attending Staunton Military Academy and the Tome School in Port Deposit, Maryland.

In June of 1936 the announcement of the engagement was made between Miss Mary Nevin and Stanley Haines. At that time, Stanley was listed as the road manager of Haines Shoe Company’s chain of 45 shoe stores. They were married April 28, 1937 in the First Methodist Episcopal Church in York.

The York Dispatch of November 28, 1944, contained the following photo under the heading; “Missing In Action.” Quoting the photo caption: “Private First Class Stanley Emerson Haines, who has been serving with the U. S. Infantry in Germany, has been missing in action since November 8; according to a telegram received by his wife from the war department. He is the son of Mr. and Mrs. Mahlon N. Haines, Haines Acres and the husband of Mary Nevin Haines.”

Stanley and Mary Haines had no children. After Stanley passed away in 1966, Mary Haines continued to live at 3026 Eastern Boulevard until her death in 1994.