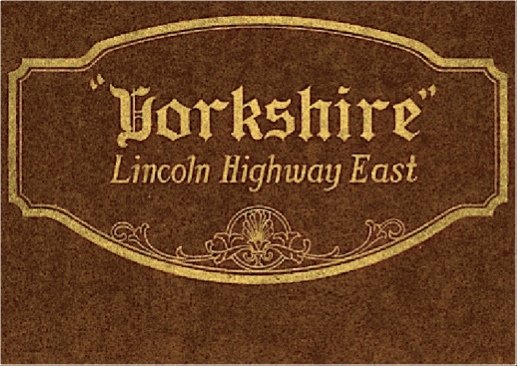 During one of the walks between the nine Yorkshire History Walk stops, a gentleman shared the story of Eastshire; a development planned across the Lincoln Highway from Ye Olde Valley Inn. By predating Yorkshire, did Eastshire influence the development of Yorkshire; located just down the highway?

During the Yorkshire History Walk on September 18th, I had requests for copies of my talks. This series of posts includes the script at each stop, with Bonus History; i.e. the full text that I started with at each stop, prior to the edit to keep to an overall 90-minute schedule. The story of Eastshire is additional Bonus History; which was new to me and I’ve now had a chance to look into it.

Stop 1 was located along Eastern Boulevard; in front of the new Yorkshire Elementary School. This starting point, per the Yorkshire History Walk map, was selected because from that location, one can look north, straight down a hedgerow; extending out to Market Street. There the hedgerow is located just to the west of the Dairy Queen parking lot. The hedgerow marks the western boundary of the 70-acre Yorkshire Plan No. 1. That plan, with 288-lots, was approved for development May 3rd, 1924.

Those 70-acres were once part of Edwin Myers massive 458-acre Meadowbrook estate, which stretched from where the York Galleria now stands, extending nearly to Longstown. Myers made his fortune in the Cigar industry during the late 1800s. Edwin’s widow sold the Yorkshire piece of that estate to a Lancaster County farmer, Charles Bacon in 1919, who continued to solely farm the land. In 1924, Edna F. Dimmerling purchased those 70-acres from Mr. Bacon.

A realtor’s office in York, known as Diehl on the Square, was the sales agent in the first weeks of Yorkshire development advertising. However when a big Yorkshire lot sale was staged at the end of June of 1924, The Conrad Realty Company of Harrisonburg, Virginia, was the selling agent.

During the last day of the sale, staged by Conrad Realty, The Spring Garden Band gave a concert during the afternoon and a new Hudson automobile was to be given away. However based upon the low deed activity and not a mention by the local papers in the sale’s aftermath, it appears that sale was a flop.

Who is Edna Dimmerling? Where did she get the money to develop Yorkshire. Edna is consistently the only person listed in the earliest Yorkshire property transactions, where she is described as a single woman of York, York County, Pennsylvania. The United States Census tells me Edna was 38-years old in 1924, and directories indicate Edna is a secretary in a realtor’s office in York, known as Diehl on the Square.

However Edna Dimmerling was also one of the three directors and shareholders in Square Diehl Realty Company. Edna had $500 invented in the company, compared to majority shareholder Plummer Diehl’s $24,000. Plummer’s real estate business was financed by his father Millard Diehl, another York Countian, who made his fortune as a cigar manufacturer, with a factory in Felton. Since Edna was a director of Square Diehl Realty Company, she had the authority to personally handle all transactions on behalf of the company.

When Mahlon Haines owned Yorkshire Ranch and the Haines Acres Farm, the properties did not share any boundary. Not withstanding, Haines did try to purchase the farm that would have connected those two properties; however Horace Keesey would not sell.

I was intrigued by the comment at the Yorkshire History Walk (paraphrasing): “Before Yorkshire, a community called Eastshire was planned on the Old Loucks Farm. A few Eastshire show houses were already built along the Lincoln Highway, when plans for the Yorkshire community were made public.” Those “show houses” were intended to showcase the types of house styles available, once development of Eastshire got underway.

Noting this was the first I’ve ever heard about that earlier development, I asked him where the Eastshire details came from. To which he replied (again paraphrasing): “My grandfather helped build those show houses along the Lincoln Highway. The main entrance to Eastshire was supposed to be built just across the highway from the Valley Inn. The Eastshire developers were having trouble coming up with the money to purchase the Loucks Farm; when Mahlon Haines came in, swooping up the farm; killing the Eastshire project before it could begin.”

I did not find any mention of Eastshire via Newspapers.com. Was the project killed prior to it being made public? The “Old Loucks Farm” was the next research task. Mahlon Haines purchased the western 138-acres of his Yorkshire Ranch on November 12, 1924 per Deed Book 22W, page 506. He purchased it from Eliza A. Stouch and her husband Alonzo Stouch. Eliza A. Loucks had previously been deeded the 138-acre Loucks Farm, in 1875, per the Last Will and Testament of Daniel Loucks. Eliza later married Alonzo Stouch. I shaded the 138-acre “Old Loucks Farm” red; on the following 1938 aerial photo.

The cover for that advertising brochure is shown at the beginning of this post. Page 8 shows the following 1924 view looking east, along Lincoln Highway (East Market Street), from the Ye Olde Valley Inn. To the right, i.e. south side, of the Lincoln Highway is the York to Wrightsville Trolley Track.

The following is a close-up view of (~five) Eastshire show houses at the right side of the photo looking east, along Lincoln Highway from Ye Olde Valley Inn; compared with 1938 versus 2019 aerial photos of that area in the 2800 Block of East Market Street in Springettsbury Township, York County, PA.

At the right side of the aerial photos, the location of the 1931 Springetts Fire House is pointed out; at 2914 East Market Street. Commercial buildings have replaced all except one, of the early 1920s show houses.

The building, presently housing the offices of Sigafoose and Jackson Chiropractic, at 2816 East Market Street, is the only “show house” still standing from the effort to establish the Eastshire community in Springettsbury Township; during the 1920s.

Did the “shire” in Eastshire influence the naming of neighboring Yorkshire? Perhaps; although we’ll likely never know.

THIS POST Stop 1—Who was really behind the initial development of Yorkshire?