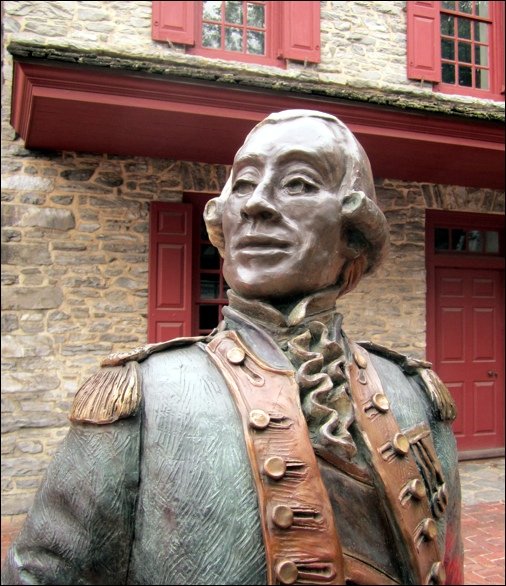 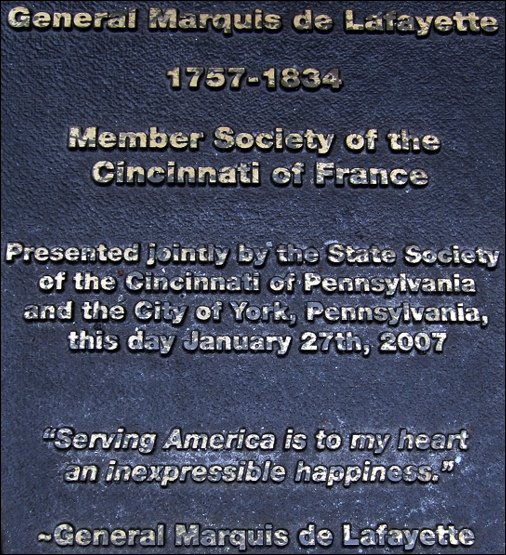 In front of the pictured house at 157 West Market Street in York, Pennsylvania, stands this life size statue of General Marquis de Lafayette. The statue was sculpted by Lorann Jacobs and placed in the sidewalk at this location in 2007. The identifying marker is mounted on the sidewalk, in front of the statue.

The statue of Lafayette is located at this spot due to a significant toast he gave on the second floor of this house during 1778. In all likelihood, that toast played a role in thwarted a scheme to oust George Washington as Commander-in-Chief of the Continental Army. Historians refer to that scheme as the “Conway Cabal.”

As the British prepared to and eventually captured Philadelphia, the Continental Congress moved inland to the relative safety of Yorktown, Pennsylvania; meeting in York for nine-months, between September 30th, 1777 and June 27th, 1778. During late 1777, a group of military officers and members of Congress began the cabal; with the supposed leader Brigadier General Thomas Conway.

These men secretly plotted replacing George Washington with Major General Horatio Gates. Gates was fresh off an American victory, with the surrender of British General Burgoyne troops at Saratoga. While Congress was in York, PA, Gates rented the pictured house, built in 1751; with the current address of 157 West Market Street.

Late January 1778, Lafayette received a dispatch while with Washington and the troops at Valley Forge. The dispatch appointed Lafayette to command a Northern army in an expedition into Canada. Lafayette immediately obtained a leave from Washington and traveled to York, Pennsylvania to meet with Congress and settle issues about this command.

Earlier in January, the politicians involved in the cabal had already made an unsuccessful attempt in Congress to remove Washington as Commander-in-Chief. Lafayette discovered that mood still lingered while attending a dinner in Gates House. Brand Whitlock’s 1929 Biography of Lafayette notes:

That night Gates gave him a dinner at his house at York, and at the hour when the toasts went round, and they were sitting in the candlelight cracking nuts and drinking port, the Marquis rose and proposed the health and success of His Excellency General Washington, and they all had to stand and drink it. He thought that they blushed; but then, candlelight casts a ruddy glow on the faces of old politicians.

Soon afterwards, the last remnants of the cabal subsided. This toast probably solidified the command of Washington, since many in Congress valued Lafayette’s influence with the French. The Memoirs of Lafayette note this incident, however memoirs of others attending that dinner do not. This seems reasonable; who would want to be remembered as opposing Washington as he became a national hero. 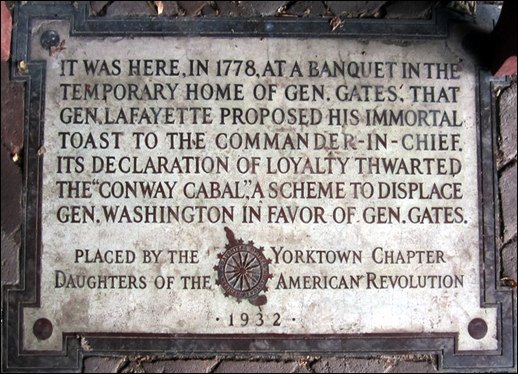 In 1932, the Yorktown Chapter of the Daughters of the American Revolution placed this marker next to the house at 157 West Market Street. At that time this building and the even older one next to it were utilized as commercial storefronts. In the early 1960s, these buildings were restored to their colonial appearance. They are now part of the Colonial Complex of the York County Heritage Trust and are open for tours (Link for Tour Information).