The Lincoln Highway was conceived in 1913 and was completed in 1926 as America’s first fully paved coast-to-coast highway. I heard from Bob Landis, after writing York is In Danger of Losing the Susquehanna Trail during 1923. During a visit to the Lincoln Museum in Illinois, he heard that Congress tried to route the Lincoln Highway through Washington, D.C. Bob surmised, “If true; York might have also been in danger of losing the Lincoln Highway.”

I’ve confirmed Bob’s suspicions via an April 14th 1914 article in the York Daily. Congress proposed a route in the eastern part of the country that went through Washington, D.C., Baltimore, Gettysburg, Harrisburg, and then on to New York City. I’ve illustrated that route on a current map and compared it to the route designated by the Lincoln Highway Association; i.e. the route actually selected.

A. P. Pardington, of Detroit, Michigan, vice-president of the Lincoln Highway Association, conducted a meeting in York on April 13th 1914. He stated, “The Lincoln Highway is here, traversing your city and county tonight and if you allow it to be moved somewhere else, you will have yourselves to blame. The time to nail it is now, while you have it.”

Mr. Pardington was making visits to the towns that would have been dropped from the route of the Lincoln Highway, if Congress had their way. He urged decisive action by Yorkers and they responded.

One such action was Mr. Pardington’s official authorization to immediately mark the route on poles through York County, using the Lincoln Highway Associations’ copyrighted red, white and blue design stenciled with the letters L and small C, for copyright. Provisions were made for this and the work began at 7 o’clock the following morning. Materials and facilities for painting the markers on poles along the route were contributed as follows: Paint, by McClellan & Gotwalt; brushes, by Harry Wasbers; labor, by the Martin Carriage Works; automobile to carry the painters and supplies, Edward Fox.

The full text of the April 14th 1914 article in the York Daily follows: 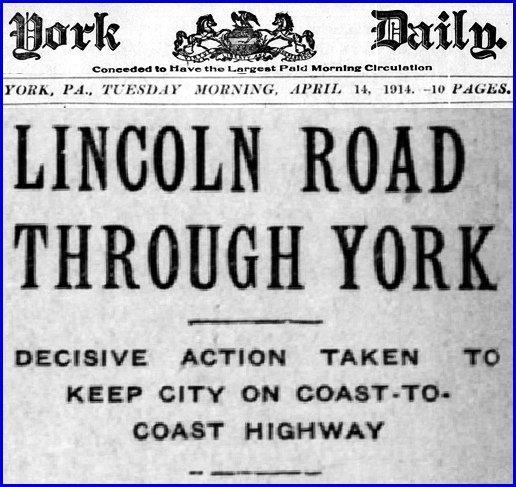 MARK ROUTE AT ONCE

Permanent Arches Will be Erected at Eastern and Western Limits of City and Name of Market Street May be Changed.

Decisive action to keep York and the county on the route of the proposed Lincoln Highway, which is to extend from coast to coast, was taken of the York Chamber of Commerce, last night. A. P. Pardington, of Detroit, Mich., vice-president of the Lincoln Highway Association, conducted the meeting and his address was such as to fire those present to immediate action, so that the official markers of the association will be painted on electric railway and telephone poles along the route from Wrightsville westward to Gettysburg.

Provisions were made for this and the work will begin at 7 o’clock tomorrow morning. A. P. Broomell was chosen as the York representative of the Lincoln Highway. Mayor John R. Lafean was authorized to take steps to provide illuminated steel and concrete arches to be placed at the eastern and western limits of the city. The cost of these arches will be $1,500 and it is proposed to raise the fund by popular subscription. Other details were covered and the adjournment of the meeting was reached.

The action taken last night goes far toward blocking the movement to have the route diverted from its original plan so that it would pass through Baltimore and Washington and thence by way of Gettysburg and Harrisburg on to New York City. As originally planned by the Lincoln Highway Association, York, Columbia, Lancaster and Coatesville are on the proposed route. The markers used along the great way are of attractive design and are protected by copyright held by the association. They are red, white and blue and stenciled with the letters L. and C., the latter indicating copyright. The markers are painted on poles usually, and when placed along an established road or a surveyed route fix the route of the proposed coast-to-coast highway.

Mr. Pardington extended to the citizens assembled in the Chamber of Commerce rooms, last night, official authority to use the association’s markers from the bridge entrance at Wrightsville westward along the York and Wrightsville Turnpike to this city, thence along Market Street to the western limit of the city and continuing along the York and Gettysburg Turnpike to the Adams County line. Arrangements will be entered into with Adams County authorities to complete the marking of the route to Gettysburg.

Congress Does Not Fix Route.

Mr. Pardington displayed maps showing the proposed route from New York to San Francisco, as planned by the association. He stated that the impression that congress is to ultimately fix the route is erroneous. States and counties in the states are adopting the route, but Pennsylvania has been backward in taking action, he explained. “The Lincoln Highway is here, traversing your city and county tonight.” Said Mr. Pardington, “and if you allow it to be moved somewhere else, you will have yourselves to blame. The time to nail it is now, while you have it.” It was this statement that aroused the assemblage to prompt action.

The great benefits the highway will bring to the doors of all those who dwell along or near the route were presented. It is proposed to have tourist cars continually traveling the highway. In California, he announced, there are 35,000 owners of automobiles anxiously waiting for the highway to be completed across Nevada and Utah, so that transcontinental tours are rendered possible. All this and much other traffic from the West will bring its benefits to the East, it was claimed, while the West will derive like benefits from the East. It was made plain that the highway is not to be for motor cars alone, but will be available to all kinds of vehicular traffic. Farmers, it was said, will be brought into closer communication with markets by means of the highway, which will be a boom to the whole country.

A. B. Farquhar Presides

A. B. Farquhar, president of the York Chamber of Commerce, presided at the meeting and made the opening address.

Mr. Pardington’s suggestion that illuminated arches be placed at the Eastern and Western limits of the city met with immediate favor. The arches are to be electrically illuminated with this inscription to guide the traveler at night.

The offer of A. P. Broomell to supply designs for the arches was accepted. Another suggestion made by Mr. Pardington was that York follow the examples of other cities to be traversed by the Lincoln Highway and change the name of the street covered by the route, to “Lincoln Way.” This may eventually be proposed to the city council. Should that body act favorably; Market Street would become “Lincoln Way” at the time of the official opening of the highway.

Materials and facilities for painting the markers on poles along the route already designated are being contributed as follows: Paint, by McClellan & Gotwalt; brushes, by Harry Wasbers; labor, by the Martin Carriage Works; automobile to carry the painters and supplies, Edward Fox. A representative of the York Railways Company gave consent to use the company’s poles from Wrightsville to one mile west of York. Eugene Weiser, secretary of the York Chamber of Commerce, will seek the consent of telephone companies for the use of poles west of that point to the Adams County line. A representative of the York Haven Water and Power Company said his company will furnish current for illuminating the arch it is proposed to place at the Western city line. The York Railways Company will be asked to supply current for the arch to be erected at the Eastern end of the city.

The York Chamber of Commerce wrote to Mr. Pardington several days ago if he could no come to York and address a public meeting here. A telegram received from him yesterday stated that he was on his way to Harrisburg for a conference on the discussed changes of route in the governor’s office today. He will also address meetings in Columbia, Lancaster and Coatesville located on the proposed route of the highway.