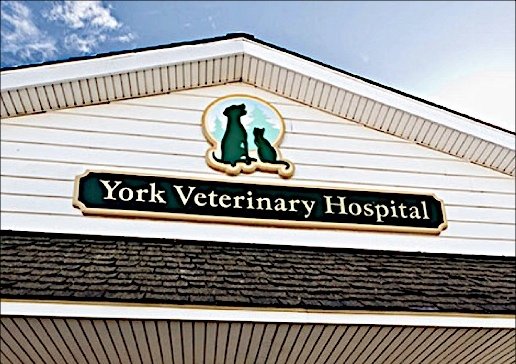 Ted Schaefer inquired about the name of the Veterinarian with a practice on the triangular plot of land between South Queen Street and Springwood Road; in the “Queensgate” region of York Township. In that inquiry Ted pointed out a prior YorksPast post incorrectly identified that veterinary business as the Amber Light Drive-In.

As a result, the history of early businesses on that triangular parcel is researched using property deed searches and newspapers.com. This post mainly deals with the parcel where the York Veterinary Hospital was located; i.e. the property on which a Gulf Service Station was later located. While the original Amber Light post, and a related Queensgate post, have been updated to correctly identify the location of that drive-in.

The earliest deed associated with a business on that 2-acre property was made September 20, 1939; from Lee P. Stark, and his wife Estelle L. Stark, to Walter F. Owen (Deed Book 27X, Page 283). The Gazette and Daily of October 9, 1939 notes W. F. Owen is acting as agent for H. R. Rouse, of Essington, Pa.; who plans to erect on this ground a modernistic lunchroom.

If anyone has details about such a lunchroom, at the intersection of South Queen Street and Springwood Road, which operated between 1939 and 1945, please share.

In 1945, the York Veterinary Hospital opens on the 2-acre property. An agreement is made March 27, 1945, with Walter F. Owen for Dr. Albert D. Thorp, of Philadelphia to lease the property, with an option to buy (Deed Book 31B, Page 250). Even though the lease starts on May 1, 1945, at $60 per month, Dr. Thorp has the right to immediately enter the property and make improvements as required for the Animal Hospital. Dr. Thorp could have remodeled the former lunchroom to start his practice. The option to buy was exercised in 1949, with Dr. Thorp purchasing the 2-acre property for $9,000.

Using a July 4, 1947 historic aerial photo, the locations are pointed out for the 2-acre site, obtained May 1, 1945, for York Veterinary Hospital, and the adjacent property purchased, February 15, 1947, for the Amber-Light Drive-In.

Albert Donaldson Thorp grew up in Philadelphia. He graduated from Pennsylvania State College, now Penn State University; after which he got his Doctor of Veterinary Medicine degree from the University of Pennsylvania.

The following May 24, 1945, ad announces the opening of Dr. Thorp’s York Veterinary Hospital; along South Queen Street, Extended, at the junction of Dallastown and Ore Valley Roads.

A year and one-half after starting his practice, Dr. Thorp married Miss Phyllis Lerew, daughter of Mr. and Mrs. Jesse Lerew, Dover, R. D. 2; on January 17, 1948. The 1950 Census records the family has grown to include two daughters; Margaret and Carol.

Ted Schaefer’s inquiry noted he and his 4 sisters were trying to remember the name of the Veterinarian once located where the Gulf Service Station was placed. Ted shared: “In 1955 my oldest Sister Shirley (did the drawing inside Brenneman’s School) was walking home from the same Bus stop at Amber Light with her collie when a car hit her. She made the driver take them to that Vet but the collie didn’t make it.”

The following article, of July 27, 1956, concerns plans of Gulf Oil Company to purchase property occupied by the York Veterinary Hospital, at 2039 South Queen Street, for construction of a service station. The article notes: “Dr. Albert D. Thorp, operator of the hospital, plans to move to Florida.”

Tremarco is a corporation that Gulf Oil Company uses to build their service stations. The Gazette and Daily of September 10, 1956 notes a $25,000 Gulf Oil Service Station will be built on the site of the York Veterinary Hospital, 2039 South Queen Street, which it has purchased for $38,500. Construction is to start in September and is to be finished within 70 working days. The initial operators of this Gulf Service Station were Lehman & Fix.

After Dr. Albert Donaldson “Don” Thorp moved his family to Florida, he established the Delray Beach Veterinary Hospital. The photo is from his obituary in The Palm Beach Post of September 11, 2008.

A 2018 aerial photo of the “Queensgate” region follows. It is covers the same area as the earlier 1947 aerial photo; providing a THEN and NOW comparison. The 2018 aerial photo shows locations of the 2-acre site, obtained May 1, 1945, for York Veterinary Hospital [Blue shaded], and the property purchased February 15, 1947 for the Amber-Light Drive-In [Yellow borders].

The 2045 South Queen Street property briefly included a few residences of people living in Mobile Homes, however the site was primarily utilized by B & K, Inc. as a sales location for Mobile Homes. The present Monro Muffler Brake Auto Service store opened in May of 1994.

In 1955 a branch bank purchased the, yellow-outlined property, of the Amber-Light Drive-In, and their follow-up establishments. Where upon, the First National Bank & Trust Company of Red Lion operated a small branch bank at 2055 South Queen Street.

In 1960, the First National Bank & Trust Company of Red Lion purchased the southeast section of the 2045 South Queen Street property from B & K, Inc. On their combined properties the distinctive circular bank building was constructed and opened in May of 1961.

Queensgate was a Schaszberger-Dempwolf farm