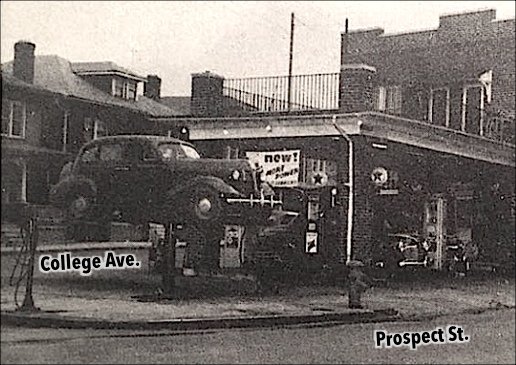 The owners of the York Tire store at Prospect Street and College Avenue encouraged its use as a neighborhood hangout during the Great Depression. That was the neighborhood where my Dad grew up. He often recalled fond memories of, and hanging out at, that business. In working on some family history, I discovered a York Tire advertising card on Pinterest and related newspaper articles.

My dad, Harold L. Smith, was born October 4, 1914, to Iva M. (Gilbert) Smith and Luther S. Smith; at their home in York at 332 East Locust Street. Dad spoke about being 10-years old when the York Tire store opened with big fanfare; give-a-ways, fancy cars all over the place, and airplanes flying overhead doing tricks. He called it akin to a carnival in their backyard. Opening day was August 20th, 1925. The following ad and other articles do reveal a festive opening.

Quoting a few of the smaller print paragraphs: “Gates Flying Circus will give Free Demonstration on our opening day, Thursday afternoon Aug. 20, above our new Filling Station—Point of College Avenue and Prospect Street.”

“We will give a can of Texaco Motor Oil FREE to the first 500 purchasers of 5 or more gallons of Texaco Gasoline.”

The neighborhood kids quickly learned, they could buy an ice-cold soda at York Tire far less than anywhere else. A room was set a-side for customer waiting, however ended up being used as a gathering place for neighborhood youth. A Barber Shop in the store also did a good business. The whole advertising card follows:

Dad graduated from William Penn Senior High School in 1932. Jobs were few and far between during the Great Depression, however, like many of his friends in the neighborhood, Dad delivered newspapers. They helped each other deliver the morning Gazette & Daily and, later in the day, The Dispatch. In between, time was nearly always spent at their favorite daytime neighborhood hangout; the York Tire store.

York Tire Service Company owners were Clarence Horn and Charles Wolf. They continued welcoming the neighborhood to use rooms in their store and encouraged card games to pass the time. York Tire eventually sponsored organized card tournaments. The guys were thankful for those tournaments, to pass the time, while they continued looking for jobs. I was surprised in discovering newspaper articles reporting on those card tournaments.

The York Dispatch, issue of February 23, 1933, contained an article entitled: “Teams Are Named For Euchre Tournament.” Quoting the full article: “At a meeting held yesterday afternoon at 3 o’clock, teams were appointed to take part in an euchre card tournament, to be given by the York Tire Service Company. The first game will be held on Monday, February 27. U. Grant Hannigan is president of the club.”

At the present time, the York Tire building still stands and continues to serve the neighborhood. The building at College Avenue and Prospect Street now houses a La Familia Grocery Store.